Response from Armed Anarchists in Ukraine

The international reaction of anarchist movements to Russia’s current war in Ukraine has overwhelmingly been one of solidarity with the Ukrainian people and resistance towards Vladimir Putin’s irridentism. However, there has been some variation therein, with almost no support for Russian aggression, which one can find plenty of among contemporary Marxist movements as well as among much of the West’s far-right. Such deviation from the position of supporting Ukrainian resistance to dictatorship has among foreign anarchist groups taken the form of complete resistance to all state-versus-state wars, instead making the case for “No war but the Class War”. It should be noted that this latter position does not always exclude the former of supporting the Ukrainian people in their current struggle, and one could argue that within the current conflict between states is ample potential for revolutionary action.

In Ukraine itself, there seems to be unanimous support for the war effort among local anarchists, though there has been some initial disagreement over questions of command structure and larger loyalties. The anarchist military effort on the ground has been organized under the banner of the Resistance Committee, who themselves are under the command and control of Ukraine’s Territorial Defense Forces. Until February 28th, one of Ukraine’s most visible militant anarchist organizations, RevDia, had been either unwilling or reluctant to incorporate themselves within the Resistance Committee, but that decision was apparently reversed due to reasons of resources and immediate battlefield practicality. 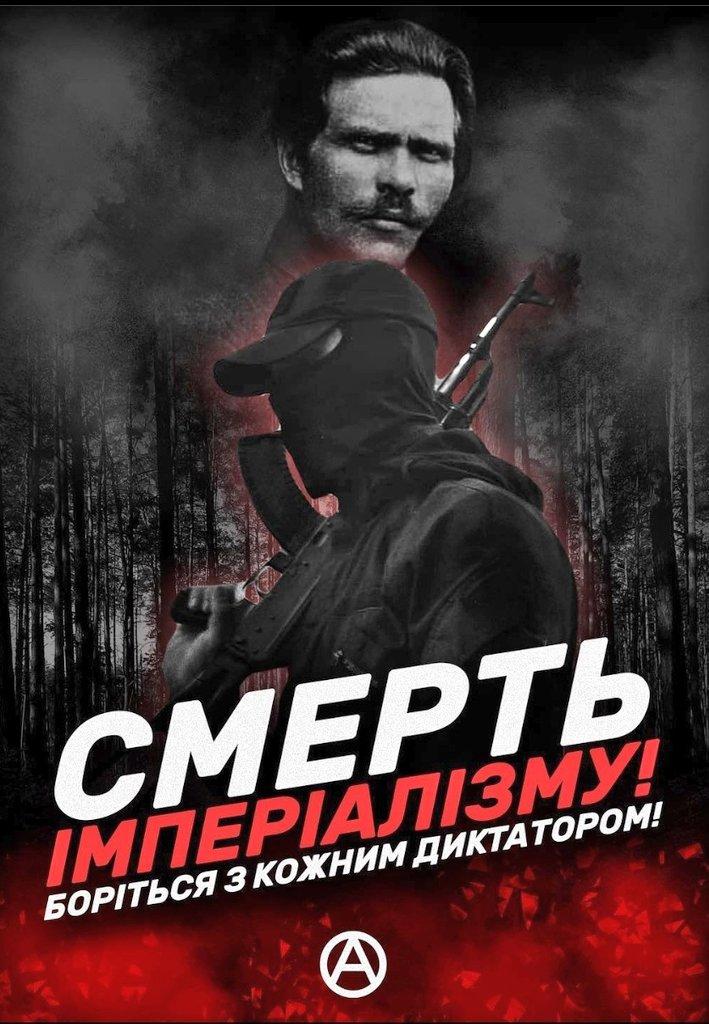 “DEATH TO IMPERIALISM! FIGHT EVERY DICTATOR!”

Militant non-state actors of every variety around the world have made their positions known on the current resumption of state-versus-state violence in Ukraine following the Russian invasion that began on February 24th, 2022. Among anarchists, the three positions on the war in Ukraine can be roughly summed up as: pro-Ukrainian people/pro-Russian people and anti-Russian aggression; sympathetic to Russian arguments regarding NATO enlargement; and against the war entirely, with the last position crossing over into the territory of the other two at times. By their very nature as anarchists, it goes without saying that all of them oppose both the Ukrainian and the Russian states.

Furthermore, anarchists are also inherently against the wars of states and their elites as they distract from the greater struggle—so to say that any anarchist is “for” the present conflict in Ukraine would be inaccurate, even though both anarchists and antifascists have found various opportunity or justification for fighting on either side. Where anarchists mostly diverge in opinion on the war in Ukraine is over the question of whether they as foreigners should embrace “international frontism” and directly assist in the military effort of their Ukrainian comrades, or whether the greater cause is best served by carrying on the fight at home.

Generally, the response from most foreign anarchists has been sympathetic towards average Ukrainians as they remain under siege from Russia. Equal sympathy has been expressed for the average Russian citizen who has no hand in the decisions of their government or their military. There has been some anarchist framing of the Ukrainian government and armed forces as fascists, citing both the reality of the neo-fascist Azov Battalion Special Operations Detachment and similar openly fascist units fighting for Ukraine, as well as matching the rhetoric of Vladimir Putin, who painted the current Russian military campaign as a “de-Nazification” effort. There have also been plenty of logical arguments made by anarchists to the effect that NATO encirclement of Russia has made this conflict inevitable on Russia’s part. Still, an overtly pro-Russian position has been hard to come by from anarchists, at least regarding the ongoing hostilities in Ukraine.

It should come as no surprise that within Russia itself local anarchists are militantly opposed to their government’s invasion of neighboring Ukraine, and have mobilized to protest in the streets despite the tremendous danger that accompanies public demonstrations in Russia. There are also Russian anarchists in Ukraine currently serving within the Territorial Defense Forces. The same can be said of Belarusian anarchists, many of whom have been in Ukraine since their own government’s violent crackdown on dissidents following rigged presidential elections in 2020. Prior to the resumption of formal hostilities between countries, and just after the Russian Security Council forced a decision on the recognition of breakaway “people’s republics” of Luhansk and Donetsk, Russian anarchists issued a statement:

We do not want to stand up for any states. We are anarchists and we are against any borders between nations. But we are against this annexation, because it only establishes new borders, and the decision on this is made solely by the authoritarian leader—Vladimir Putin.

Elsewhere in Europe, there have been more nuanced positions taken by anarchists. In Italy’s central Umbria region anarchists released a communique entitled “WE DO NOT ENLIST” in response to calls put out from Ukrainian comrades for foreign anarchists to join the fight. The authors make a classically militant left-wing argument against the transatlantic alliance, unchecked NATO enlargement, and the West’s endless wars in the Middle East, before making the case that for anarchists outside of Ukraine, the international struggle lies not on either side of the Russo-Ukrainian front, but at home against their own governments and elites.

Elsewhere in Europe, there have been more nuanced positions taken by anarchists. In Italy’s central Umbria region anarchists released a communique entitled “WE DO NOT ENLIST” in response to calls put out from Ukrainian comrades for foreign anarchists to join the fight. The authors make a classically militant left-wing argument against the transatlantic alliance, unchecked NATO enlargement, and the West’s endless wars in the Middle East, before making the case that for anarchists outside of Ukraine, the international struggle lies not on either side of the Russo-Ukrainian front, but at home against their own governments and elites.

Wars are always a bloodbath for the exploited and a rich business for the bosses. We are not interested in the opposing propaganda reasons of the belligerents. The exploited in Russia as in the Ukraine, in Italy as in the USA are our brothers & sisters, their blood is our blood. The governments, the generals, the industrialists, the financiers are our enemies, our executioners, our starvers.

This seems to be the primary position among Italian anarchists and far-leftists, and is nothing new in Italy, but is in fact a sentiment that has driven anti-NATO militancy and resentment towards Soviet authoritarianism since the early days of the Cold War.

Another anarchist opinion out of Italy entitled “Sabotaging the War” goes on to make a more detailed critique of the alleged military adventurism of the Biden administration, pointing out the greater geopolitical reality of a subducting world power in the US confronted by an ascendant China, and repeats the argument that unchecked NATO enlargement made the present reaction of a totalitarian Russian state inevitable, before similarly committing to the struggle at home and rejecting international “frontism” within the global anarchist movement:

Among Greek anarchists, as well as anarchists in Latin America with whom the former have had a close historical and cultural affinity since the mid-20th century (largely owing to a similar US/NATO foreign policy in both’s geographic regions), there has been a particular focus on the US’s double-dealing with Russia, as well as its perceived insatiable imperialism. Like their Italian counterparts, the Greeks too have plenty of historical grievances with NATO and the US related to meddling in their own affairs. They have also given significant attention to the fascist elements of past Ukrainian post-Yanukovych administrations and to those presently within the armed forces of Ukraine, while there has been no lack of solidarity for the Ukrainian people among Greek anarchists. Perhaps complicating the matter for Greeks of any political persuasion is a historical relationship with Russia going back to the Greek War of Independence (1821-1829), in which Russia militarily intervened on Greece’s behalf. Demonstrations in Greece have maintained a general solidarity with the victims of all wars and opposed state violence.

During demonstrations on the evening of March 1st, Greek anarchists carried a banner through the streets of Athens that read: “NEITHER RUSSIA NOR NATO. FOR THE GLOBAL PROLETARIAT”

Closer to the conflict, anarchists in Germany have been supportive of the broader resistance in Ukraine, while naturally maintaining their critiques of NATO and their condemnation of overtly fascist divisions within the Ukrainian Armed Forces. Perhaps owing to the restrictions and scrutiny imposed upon them by local law enforcement, or the risks involved in traveling to the fronts in Ukraine, German anarchist action in support of the Ukrainian resistance has so far primarily focused on mutual aid and demonstrations of solidarity with both antifascist Ukrainian fighters and refugees. This is likely to change if the conflict drags on, and Germans are one of the more probable nationalities to fight alongside Ukrainian anarchists in the event of a protracted war.

As the new administration of Chancellor Olaf Scholz has cited the security situation in Eastern Europe as a justifiable cause for German rearmament, German anarchists have equally given their attention to opposing militarization within their own country. Mobilization against increased armament of the Bundeswehr is a guarantee over the coming months and years.

In other parts of Germany, anarchists demonstrated against Russian aggression, while at the same time expressing their solidarity with the Ukrainian people and proclaiming: “No War but the Class War”. This is perhaps the most common position on the conflict among anarchists globally.

Belarusian anarchists posted propaganda on social media that read: “Soldier! The enemy is in the Kremlin/Drosdi, not in Kiev.”[1]

A growing perspective on the war held by anarchists internationally is that the present conflict is yet another sign of a weakening world order, beginning with the weakening of the nation-state. Within this vacuum, anarchists have assessed there to be ample opportunity for greater access to resources, an increase in their military capabilities and a growth of the movement altogether.

Response from Armed Anarchists in Ukraine

Anarchists in Ukraine—a mix of Ukrainian, Russian and Belarusian nationals—were quick to mobilize for the country’s defense against Russia. One of the more prominent anarchist outfits in Ukraine, RevDia, has been organized and training with small arms since ca. 2015.[2]

Though Ukraine itself has one of the most storied histories of successful anarchist organizing, notably culminating in the Black Army of Nestor Makhno during the Russian Civil War, anarchism was almost completely suppressed in the latter 20th Century under communism and did not make a significant comeback until the 2014 Euromaiden uprising, or “Revolution of Dignity”. Since those early days, and while having to avoid being crushed in the streets by local hard-right paramilitaries, Ukrainian anarchists have over the last eight years consolidated their movement into small but steadfast cells. Given the amount of attention Ukrainian anarchists have received since the beginning of the February 24th invasion, and, assuming they survive coming battles with the Russians, it is likely that the present conflict could provide them with significant growth.

Beyond self-proclaimed anarchists, anti-fascist formations have also organized for the defense of Ukraine and joined the Resistance Committee, such as those already grouped under football fan clubs.

If they can avoid infighting such as has been warned of by fellow anarchists, as well as survive both the Russian onslaught as well as attacks from local right-wing and opposing left-wing forces, there is a good chance that the current conflict will cement veteran anarchists as a permanent political force in the country, where militant anarchism has been absent in any significant sense for the last century. 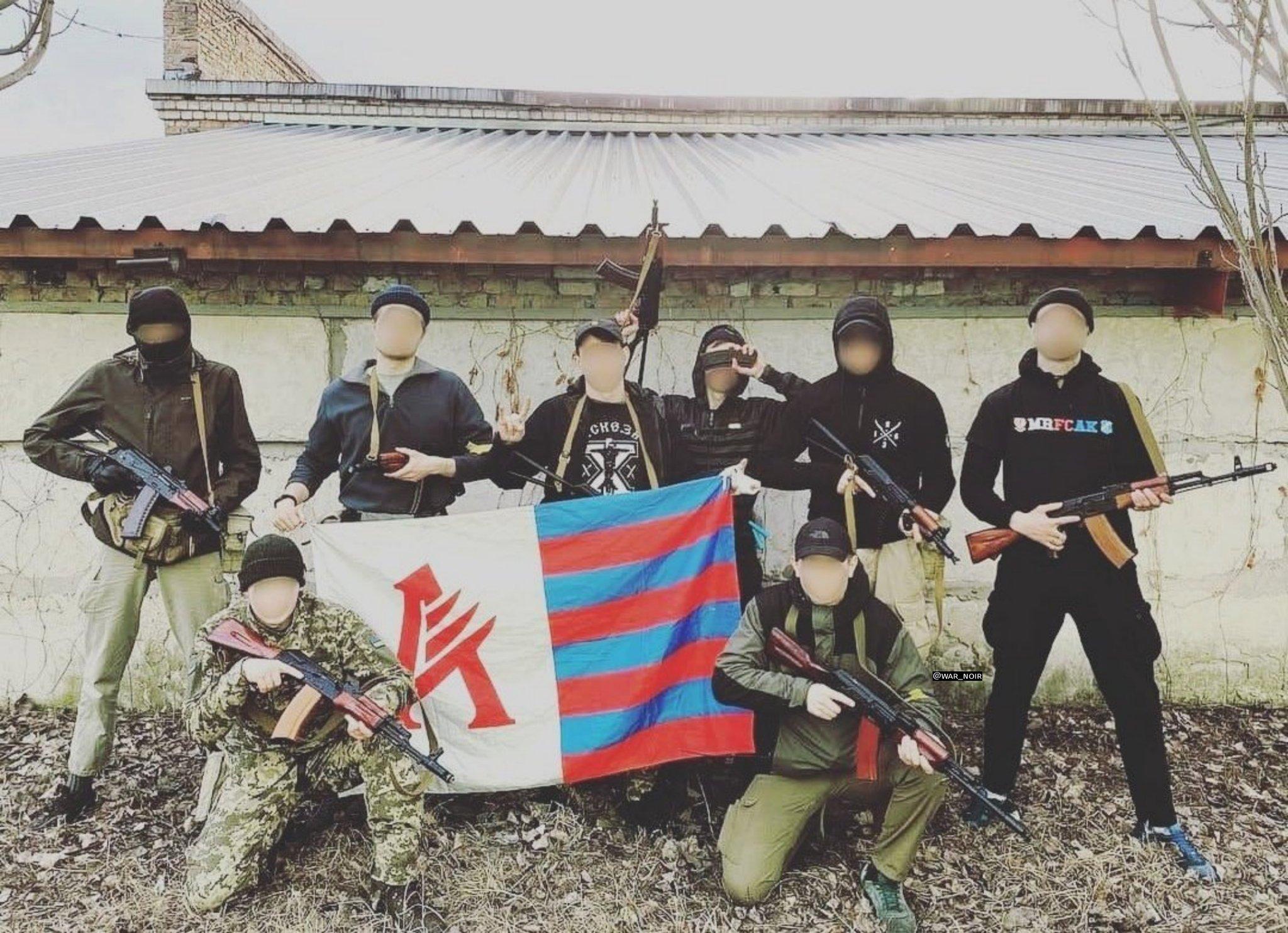 [1] "Drosdi" is a nickname for the Belarusian presidential residence

[2] RevDia is truncation of the Ukrainian, “Revolutionary Action,” which is expanded from the original Belarusian anarcho-communist outfit of the same name (aka “RevBel”). The greater organization apparently has cells in Belarus, Ukraine and Russia.