On May 20th, the Resistance Committee (aka “the Black Headquarters”), an anti-authoritarian umbrella group within the Territorial Defense Forces (TDF) of Ukraine, published a copy of their first official four-page manifesto. The document explains their position on the war, their principles, the extent of their current combat and non-combat operations, and their aspirations for the future of Ukrainian society. Perhaps most importantly, the manifesto clarifies many of the questions that outside observers have posed to the Resistance Committee since they and adjacent anarchist fighting formations announced their official mobilization within the TDF in the defense of Ukraine against Russian invasion.

According to their manifesto, the Resistance Committee considers themselves “the space for dialogue and coordination of anarchist, libertarian and anti-authoritarian initiatives” within Ukraine, and especially among aligned fighters of the TDF. Most of their force seems to be made up of anarchists from Ukraine, Belarus and Russia—several of those from the latter neighboring countries having been in Ukraine since the 2014 Maidan Uprising. However, other pre-war organizations that consider themselves anti-authoritarian and anti-fascist, such as the Arsenal Kyiv football hooligan firm, Hoods Hoods Klan, have organized themselves under the Resistance Committee as well.

In addition to discharging their contracted duties as volunteer fighters of the Ukrainian TDF, members of the Resistance Committee have also established and collaborated on mutual aid campaigns such as “Operation Solidarity” with the assistance of both Ukrainian and foreign comrades outside of Ukraine, in which non-lethal aid such as ballistic vests and helmets were gathered for those defending their country, to name a few items. Alongside combat duties and carrying on their media operations, the Resistance Committee lists “civil volunteering” as its third primary function in the war.

Militant Wire caught up with Greek filmmaker and journalist, Alexis Daloumis, who was filming on the ground in Kyiv at one of Operation Solidarity’s main logistics hubs. We asked about the relationship between the civilian anarchist aid effort and the Resistance Committee. Speaking on this relationship, he assessed:

Solidarity and the Resistance Committee have been organically linked since the beginning. Before the war, anarchists from different sides (and in coordination with other antifascists) got together and decided that some would join the armed resistance and some will handle logistics. They have been administered, however, autonomously from each other, and Operation Solidarity also supports other groups and individual anarchists within the armed resistance in various other places of Ukraine.

It is important to note that the activists who make up the non-combatant Operation Solidarity network also provide aid to civilians that is not directly related to the war effort. Most recently they delivered food and sundry items to civilians in Chernihiv for the second time. 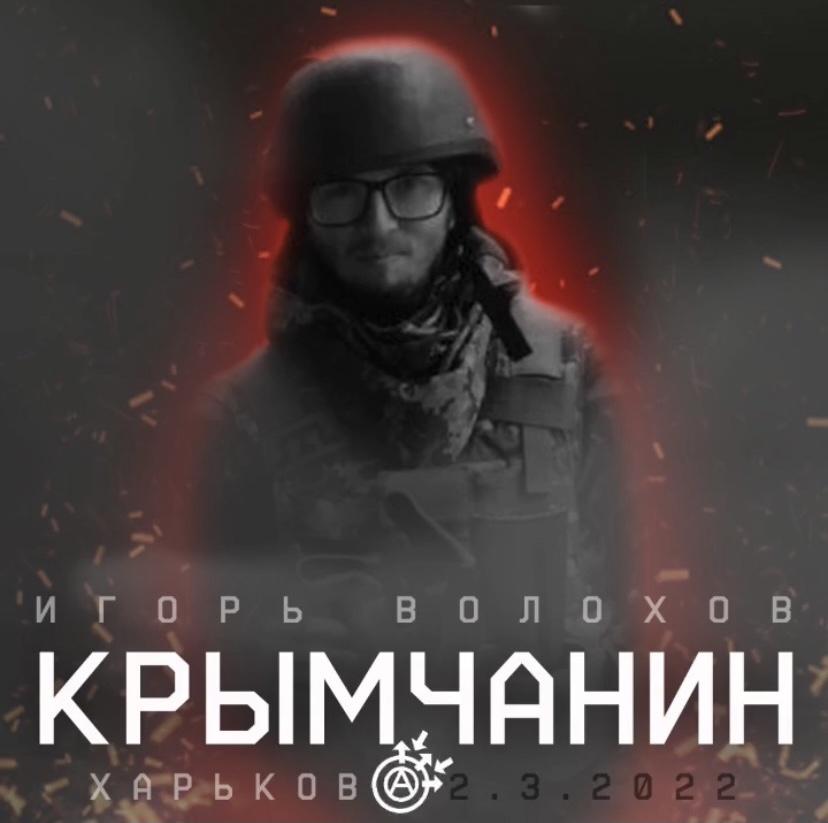 In terms of their presence on the battlefield, the Resistance Committee lost an anarchist comrade to a Russian missile strike in Kharkiv in March 2022. On May 6th, the official Instagram account of the Resistance Committee posted photos of their fighters on the front lines, from a bunker armed with a DShK heavy machine gun and separately a Dragunov marksman’s rifle. They have posted videos of themselves armed within their various areas of operations, notably in one video to declare their solidarity with four anarchists in Belarus who were given steep prison sentences by the Lukashenko government for their political activities. According to photographs they have posted on their official social media accounts, the Resistance Committee has as many as 2-3 dozen fighters grouped in one area of operation at a given time, and they were mostly concentrated in the capital Kyiv during the first part of the war, but some of those affiliated anti-authoritarian fighters have since been redeployed to front lines in the east along with other members of the TDF. 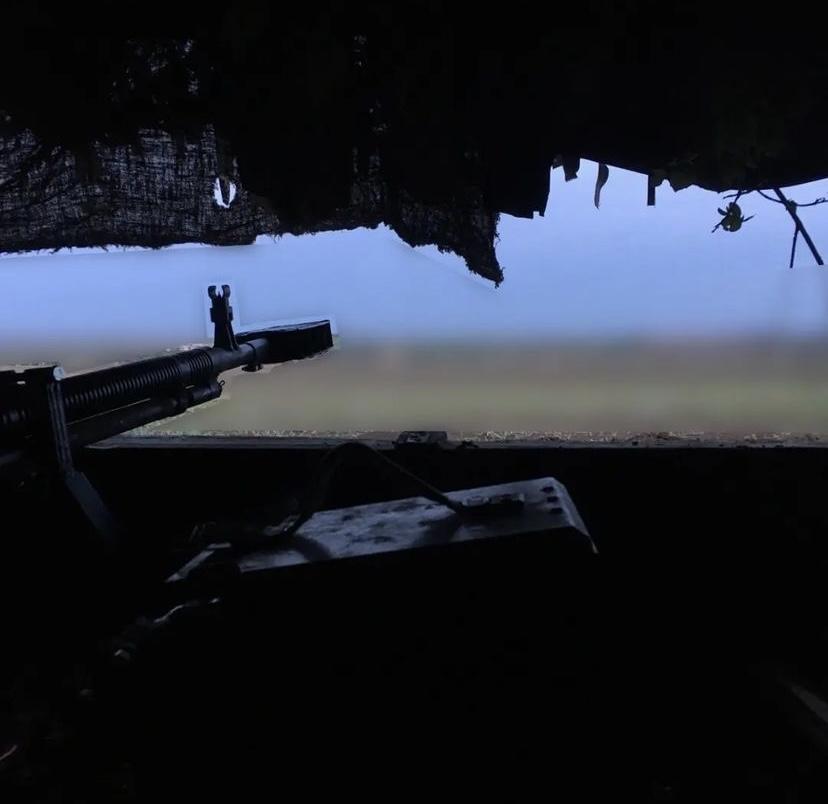 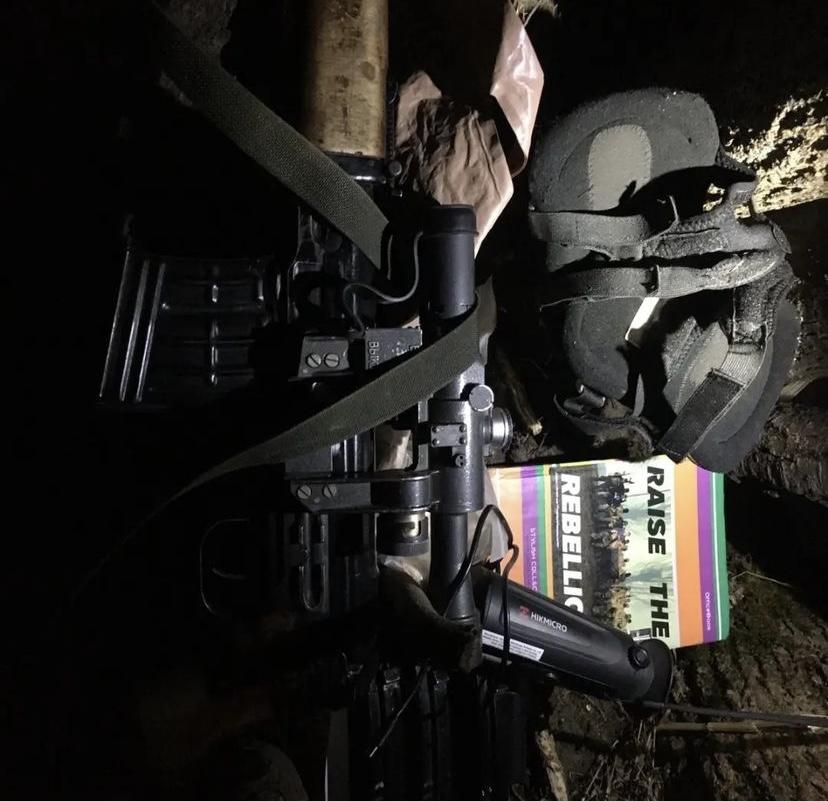 In providing context for the formation of the Resistance Committee, their manifesto makes clear why they joined the fight: “Today’s war in Ukraine is the continuation of the struggle for peoples’ freedom from all authoritarianism […] even though today the Ukrainian state is on stage, the resistance against the invasion is being waged by the mass popular movement.” They are explicit about their goal of uniting those currently fighting for the defense of Ukraine who are ideologically aligned, “for the sake of effective struggle for our values and ideals,” aspiring to support this struggle in neighboring Belarus and Russia as well. Naturally, as anarchists, they neither consider the Russian people their enemies nor do they consider the people of Belarus enemies, whose government is directly supporting the invasion. Their manifesto lays blame for the conflict squarely on the shoulders of Putin’s imperialism. “We call all free-minded Russians and Belarusians to fight against the dictatorship with us […] We want to see ourselves and our neighbours free. It means that we should put an end to Putin’s regime.” They further outline their organization’s commitment to causes of justice and equality within a feminist, anti-racist and environmentalist framework. 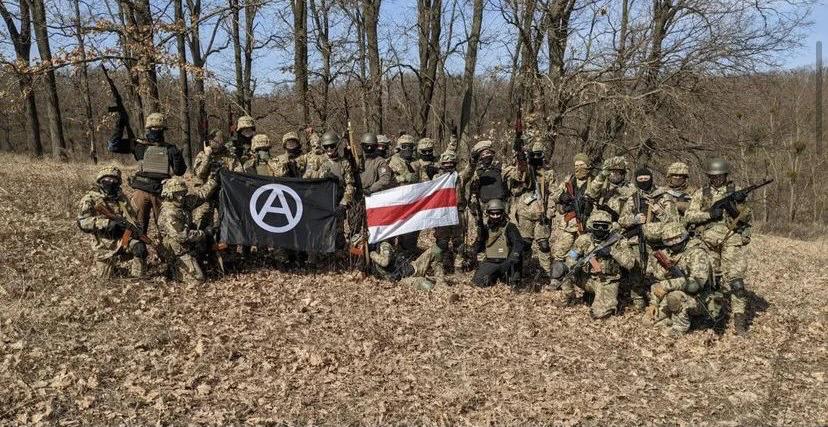 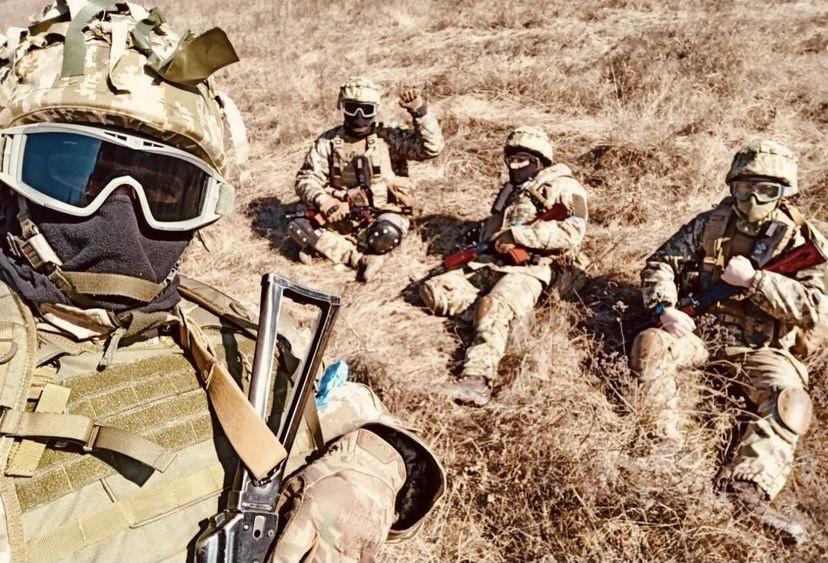 The latter half of the Resistance Committee’s manifesto outlines their aspirant aims for Ukrainian society and how they are working towards these changes during wartime. Some of these aspirations come in the form of demands from the current Ukrainian government, such as “credit amnesty” for low- and middle-income Ukrainians, free public transportation, subsidies for the poor, as well as citizenship or at least full legal residency for foreign fighters currently engaged in the defense of the country. Other demands are made of assisting countries and multilateral institutions, such as a complete cancellation of Ukraine’s external debt. Under their own power, they seek to establish a network of “assemblies,” or local grassroots organizations that function like labor unions or collective trade associations, demanding that more tools and resources be put back into the hands of these organization so that they might stand a better chance of determining their future success and resiliency during wartime and prospectively once hostilities end. 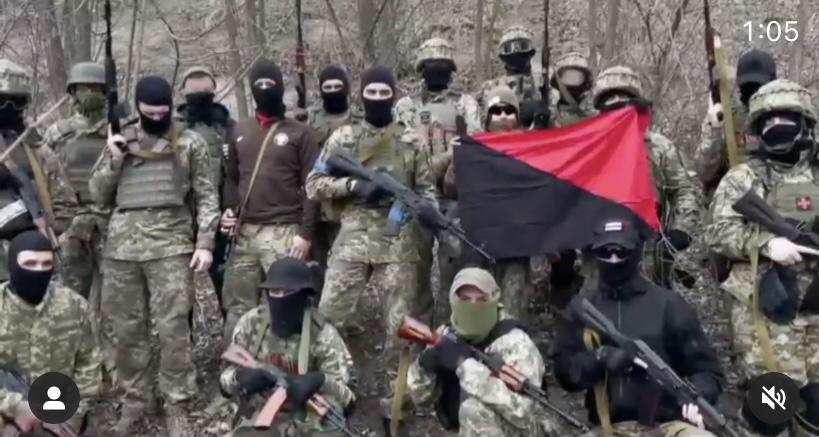 Significantly, point #12 in their manifesto demands: “Common access to the means of self-defense as a condition of freedom and opportunity to protect oneself from aggressors. Simplification of access to arms.” For those who have been skeptical of this anti-authoritarian collective’s military support for the state-backed TDF, point #12 gives us a view into the ultimate ambitions of anarchists currently fighting for the defense of Ukraine. From the anarchist perspective, the war is a tragedy but provides the opportunity for a political revolution of some kind in the country, especially if an unfavorable peace is eventually negotiated. Anarchists know this. And so do their ideological opponents such as openly fascist fighting formations who are mutually engaged in the defense of Ukraine. 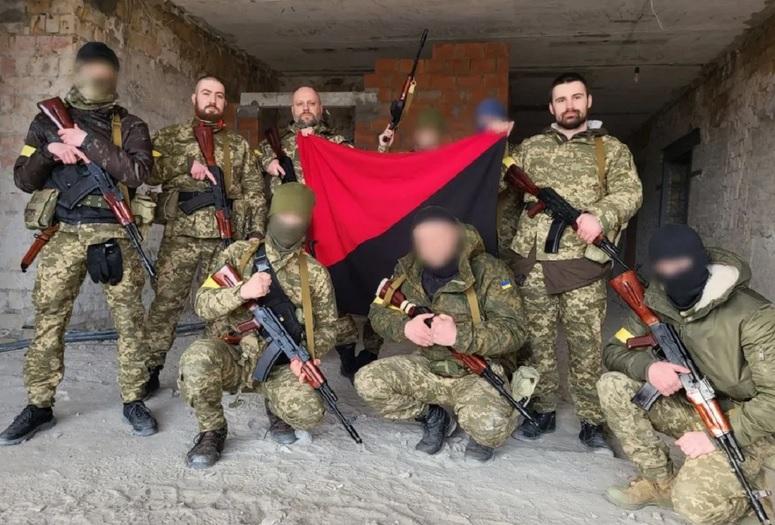 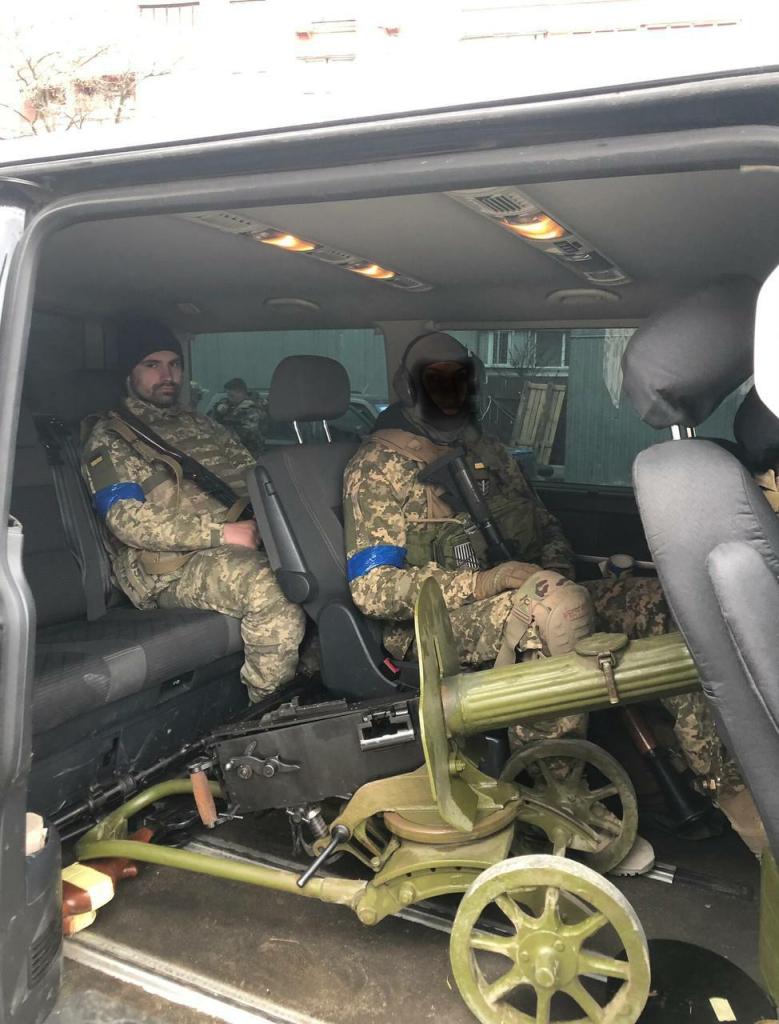 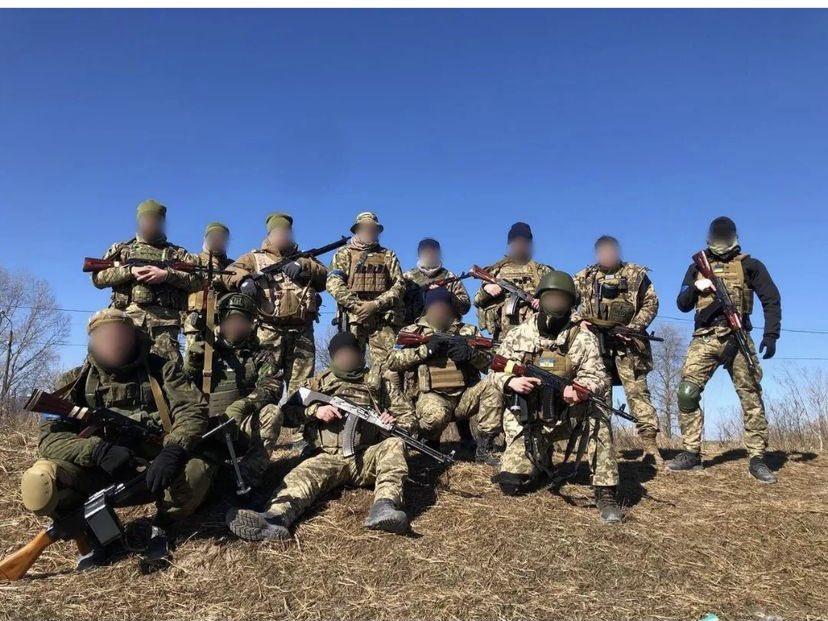 Other anarchist militias, such as Black Flag Ukraine, are also serving within the Ukrainian TDF, though they were only somewhat recently incorporated into the Resistance Committee and might even be at ideological odds with a core of the Black Headquarters’ anarchist fighters. Regardless, Black Flag has been independently organized since 2016 and is mostly based in the west of the country and around Kyiv, and have so far been welcomed and received solidarity from aligned fighters. A prominent anarchist militia dating back to the Maidan Uprising, RevDia, with roots in Belarus, incorporated into the Resistance Committee after at least some initial dispute, apparently. However, for now the anarchist and broader anti-authoritarian movement seem to be united in their fight against Russia, with little visible fracture within the movement and without militarily engaging ideologically antithetical movements also defending Ukraine, such as the Right Sector or Azov Regiment. That said, casting such a broad net over various “anti-authoritarian” groups likely could lead to significant divisions in the future, especially if decisions on the battlefield are seen to be subordinated to radical politics. For now, everyone appears to be on the same page, as the situation remains dire for average Ukrainians and the basic defense of the country is the main priority.