The Fight for Brookland Manor, Part One 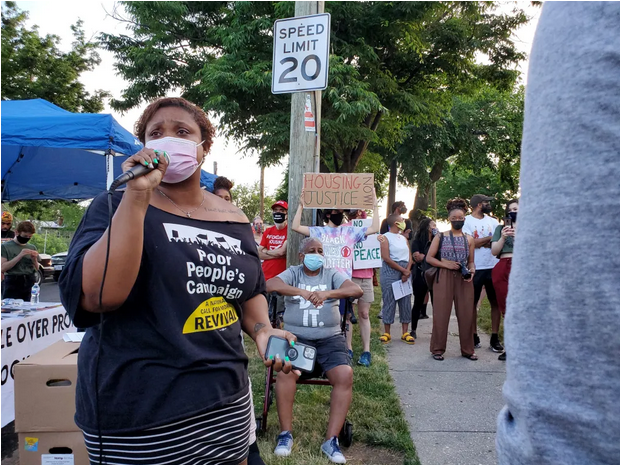 DC Mayor Muriel Bowser’s budget proposal for Fiscal Year 2022 allocates $400M towards affordable housing via the Housing Production Trust Fund (HPTF), but comrades at Street Sense Media found earlier this week that the HPTF has honored its commitment to extremely low-income residents only once since the fund was started 20 years ago. For our neighbors at Brookland Manor—and thousands more throughout Chocolate City—this comes as no surprise.

Located just a 15-minute walk east of the Rhode Island Ave. Metro Station in Northeast DC, Brookland Manor is a 535-unit residential development comprised of 3-, 4-, and 5-bedroom units, all of which are affordable to working-class Black and Brown families. These “family-sized” units are DC’s scarcest form of housing, and one hundred of them will be permanently destroyed if the property owner and developer, MidCity, is permitted to execute its development plan.

With nearly half a billion US dollars allocated from the HPTF for developers such as MidCity, it would appear that the protection of affordable housing and inclusion of residents in future developments is not a difficult—and certainly not underfunded—task, and yet our neighbors at Brookland Manor have still not received the protections they have been promised by the District, the HPTF, and MidCity.

For some former residents, this vulnerability has proven to be completely unliveable. Under MidCity’s zoning obligations to the city, the number of affordable housing units it is obligated to construct is equal to the number of affordable units currently occupied. However, DC property law states that any residents who move out prior to development are considered to have “voluntarily” moved, and MidCity would therefore not be obligated to provide housing for them. As a result, MidCity has undertaken a hostile and violent approach to residents and neighbors by preventing access to community spaces (such as playgrounds and swimming pools), engaging Special Police to harass residents and neighbors, and even going so far as to file fraudulent eviction notices. These horrifying conditions are working as intended, and the remaining residents have noted that other families have chosen to move out.

Of course, MidCity has repeatedly claimed that no one will be displaced in the new development, yet for years has refused to release the resident demographics to cross reference and provide data for an accountability process to be developed. MidCity has also continuously lied in order to gain the necessary approvals for its developmental efforts, only to be shielded time and time again by the DC judicial system.

This past March of 2021, a city appellate court rejected the community’s most recent legal attempt to halt MidCity’s redevelopment plans until the necessary accountability processes are established. This has once again placed Black and brown families at risk simply for living on MidCity’s property. As the uncaring developer and DC government move forward with their modifications to the residential properties, it is imperative to center the demands of those who are to be most impacted: the residents.

Their demands are as follows:

1. The 535 units of affordable housing must be preserved at the current bedroom sizes and current subsidy levels.

2. Residents must be able to remain on the property during the process of redevelopment (redevelopment in phases to prevent displacement) i.e., ‘Build First’ development.

3. Residents must have the ability to access employment opportunities through the rebuilding of their own community, of which we have a fundamental right to be a part.

4. The DC Government must clawback the $47M public dollars that it gave to this project unless the above demands are met.

The Washington Revolutionary is seizing the opportunity to profile residents of Brookland Manor in our next few issues with great enthusiasm and humility. By highlighting some community members and leaders from Brookland Manor, we hope to humanize their struggle and elucidate the interconnectedness of our collective fight against gentrification, poverty, displacement, and illegitimate governance across DC.

Hundreds of families call Brookland Manor home from all different backgrounds and walks of life; as opposed to mainstream journalist coverage, we aim to re-envision what proper representation of this neighborhood looks like by giving a spotlight to those comrades that inspire the community to continue pushing forward. We thank these comrades for their willingness to work alongside our team, for letting us into their lives and sharing their powerful stories with open hearts. In uplifting their voices through this series, we hope that the DC community will come together to demand justice for Brookland Manor, as one of the last artifacts of Chocolate City that remains.