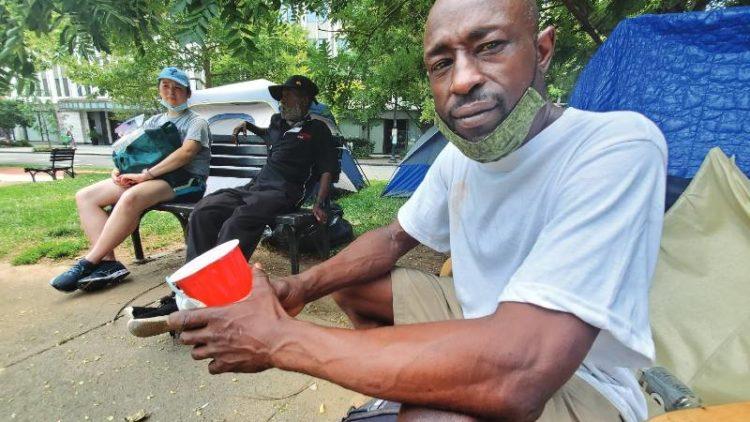 Mr. Buchanan has been on the waitlist for a housing voucher since 2019, well before the worldwide pandemic that broke the financial safety net of thousands of Americans – housed and unhoused. He is a resident of the encampment of unhoused D.C. residents that live between two parks in the Mt. Vernon neighborhood of NW. Throughout the first week of July, I got to know Mr. Buchanan – a man many in the encampment refer to as their “governor” due to his spokesman like role and concern for the community – as well as this tight-knit Mt. Vernon community and its needs. “They should come out and come see us.” Mr. Buchanan tells me when I ask him something about the encampment he wished people knew. “Talk to us and find out more of what we’re about rather than what they assume we’re about.” The “they” Mr. Buchanan is addressing are the neighboring housed residents who recently came together to rally against the encampment in an attempt to force an eviction.

Currently, under the CDC guidelines D.C. follows, evictions of encampments of unhoused people are not allowed due to the health risk evictions pose under the still ongoing pandemic. The city tends to provide two weeks notice of evictions and for the past year has mostly been doing clean-ups to clear sidewalks rather than the so-called “full engagements” seen in similar cities like Los Angeles that send police and construction equipment to trash unhoused resident’s possessions, legal documents, and livelihoods.

However, many of the large patches of grass found between lanes of traffic are technically a part of the national park system and under the authority of U.S. Park Police – not the city. Because D.C. has relatively humane policies when it comes to encampments compared to the rest of the U.S., several gentrifiers in the Mt. Vernon neighborhood issued a letter on June 28th, 2021 with cruel language calling the unhoused residents “vagrants,” and demonizing addiction and mental health.

Because the city of Washington was unwilling to clear these people from their homes, the gentrifiers appealed to federal agencies, including U.S. Park Police. Park police are federal police which exist only in three U.S. cities: San Francisco, New York, and Washington, D.C. Their purpose is to protect the statues and national monuments that dot D.C. However, these police are not park rangers, like we might expect and find in national parks. Many Washington Revolutionary staff and readers are familiar with federal park police as the police force that brutalized peaceful protesters on June 1st, 2020 during the clearing of Lafayette Park. They deployed teargas, pepper spray, and rubber bullets in what would come to be known as “Black Lives Matter Plaza” throughout the summer of 2020. But rather than lobby for social services, hygiene like port-a-potties and sinks or even housing, privileged Mt. Vernon gentrifiers decided that sicking federal police, who we know to be excessive and violent, on an encampment of 15 unhoused neighbors was a better option.

On July 5th, daily watches began at the encampments after Park Police stated they planned to move on the park after the 4th of July. Neighborhood commissioner Alex Bailey, with the help of the unhoused community, concerned neighbors, as well as orgs like Ward 2 Mutual Aid, Sunrise DC and Remora House took shifts hanging out at the camp, providing food, water, resources, and even putting on several cook-outs. Most days when I arrived at the camp, residents were sweeping or checking in on each other and the status of the potential eviction. Dave Prentiss, a DC resident who came out to help shared with me that getting to know the unhoused people in his Ward 4 community gave him a “broad sense of what ‘neighbor’ means.” The new community of unhoused residents and their supporters created a media frenzy on social media and local networks. By the end of the week, park police announced that they no longer had plans to evict any camp without proper notice. Had the eviction taken place, many residents would have been forced onto benches and the sidewalk or far-flung parts of DC they’re not familiar with. More so, it would be harder for social workers, mutual aid volunteers, or representatives like Alex Bailey to find them for resources. Currently, Bailey is raising money – and spending from her own pocket – to purchase birth certificates and other legal documentation for the residents to begin the process of getting housing. Many have lost paperwork due to constantly being on the move, theft, or evictions and need professional help in the long, arduous, often confusing process of applying for housing vouchers. With the stay on the eviction, this is now possible.

If you would like to financially support this project, cash app commissioner Alex Bailey at $AlexandraOMB. If you would like to assist more, there will be an inter-agency day on July 21st, 2021 at 12th and Massachusetts. We kept us safe, we will continue to keep us safe. “It’s a long climb back.” Mr. Buchanan shared with me, “but if you try to get back, you will. But it takes time.”