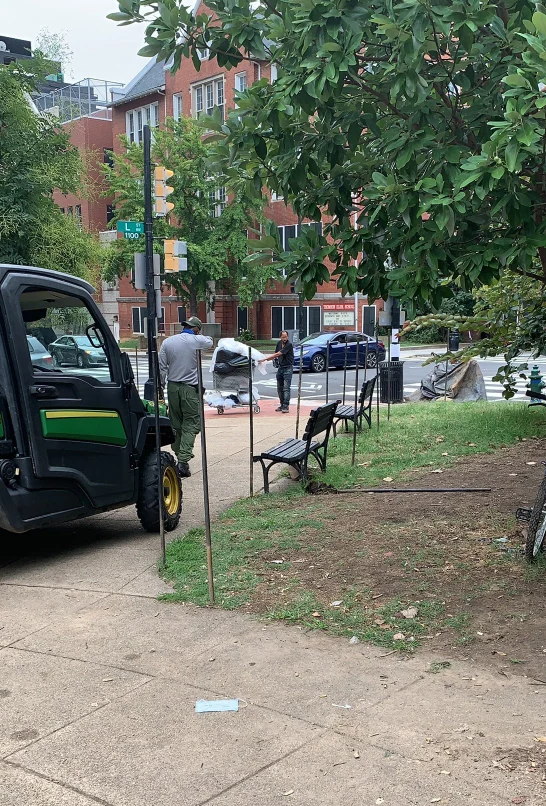 On Sunday and Monday, Aug. 15th and 16th, activists assisted a community of about 15 unhoused residents living at Burke and Gomper’s Parks to relocate after displacement by US Park Police and The National Park Service (NPS). The well-established encampment of largely Black community members was forced to move despite ANC Commissioner Alex Bailey’s consistent requests for extra time as she moved the unhoused residents through the housing voucher process.

Last month, The Washington Revolutionary reported on the minor victory at Burke and Gomper’s with a stay of the impending eviction in July. But unhoused residents and allies, like Bailey and abolitionist groups, Remora House and Ward 2 Mutual Aid, continued to advocate vocally to Ward 2 Councilmember Brooke Pinto and the NPS to cease the process entirely. However, by August, the story from Park Police and NPS had changed, as residents learned the eviction would then be carried out the second week of August.

According to a post made on Commissioner Bailey’s Twitter account on August 14th, the eviction was supported by NPS and Councilmember Pinto. “I was told directly by the Park Police that DMHHS and my council member were in favor of the plan to remove people from Burke Park. That this eviction was happening at the behest of my government and elected rep,” the tweet states. Bailey quote-tweets a “response to the planned National Park Service closure of Burke and Gomper’s park” which states summarily:

“We have seen the number of tents pop up around the city especially in Ward 2 and I am steadfast in my commitment to move neighbors into shelter and housing…I’ve called on DMHHS to move quickly to get residents into housing.”

However, these remarks have proven to be simply untrue. According to local activists and advocates in Ward 2, much of August 15th and 16th was spent finding temporary areas in parks and safe spaces for the now ousted unhoused residence. Plans for “quick” housing remained unknown and those in Burke and Gomper’s park remain on the streets.

One Ward 2 activist who has been consistently working with the Burke/Gompers community shared with The Washington Revolutionary, “most of the folks I talked to had no real idea of where they were going to go. A few of the folks who showed up to help tried to identify a few options, but people were basically moving all of their possessions without having the opportunity to check it out and make a real decision – a pretty important process in how most people move.”

The engagement was rushed and left many of the residents and their allies without much information or options on how and where to move. There was little time to “[plan] it out” and practical actions like “location visits” were not possible, the Ward 2 abolitionist explained.

While many were able to move their tent and belongings despite the threat of police presence, according to organizers on the ground, some had their possessions stolen by the DowntownDC Business Improvement District (BID), a non-profit which wrestles for policies that support businesses, often prioritizing property and profit over life. The DowntownDC BID removed remaining tents even though residents were promised more time to reclaim them by NPS.

This engagement is one of several to occur. Earlier in the month, we reported on the fencing off of an encampment near Union Station. As the eviction moratorium nears a possible close, and many who work in the DC area with antagonistic attitudes towards the unhoused return to the city, more full engagements are something abolitionists must be concerned about. DC has over a dozen small “federal parks”. The federal/city divide in DC puts many unhoused residents at risk of possible intervention by federal or Park Police. Because this land is considered federal property, surrounding constituents have little choice in how to protect their unhoused neighbors, and even supportive elected officials can have their hands tied.