DC Elders Organize Tenants’ Association and Fight for Their Rights 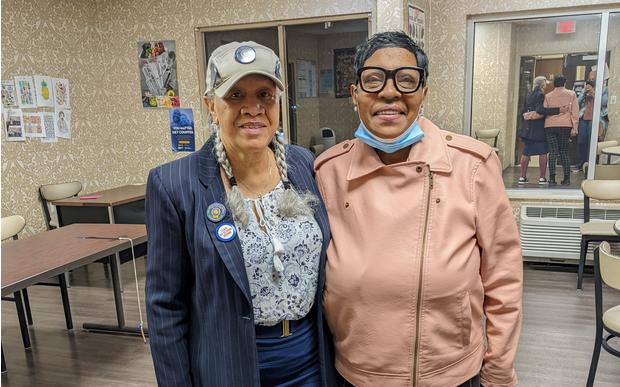 Last Tuesday, I received a call from Ms. Richmond, a local activist I met while covering the sit-ins at Howard University. She had stopped by frequently to support and, over the course of our conversations, she explained to me that she was having issues in her apartment. Between October when we met and January of this year, her building had unionized, forming a tenants’ association. She invited me to sit in on the second meeting in the community room of their U Street neighborhood apartment building.

As I got situated, several dozen residents filed into the room, signed their names, and picked up flyers and brochures explaining their rights as tenants. Ms. Richmond handed me a colorful blue flier, appropriately decorated with cherry blossoms for the time of year, decorated the tables.

It read: “Protecting Our Vulnerable Elders”

This tenants’ union is composed entirely of residents of the Paul Laurence Dunbar Apartments – an affordable housing unit catering to residents 62 years of age and up. On this day, principal organizer and Dunbar resident Ms. Glenda Richmond invited Tony Towns, the assistant attorney general in the Civil Rights Section and Jessica Berger, the assistant attorney general of the Elder Justice Section of the D.C. Attorney General’s office. Both Towns and Berger arrived under claims that the residents were being targeted by their landlord – or slumlord as we will come to find out – because of the vulnerable position as elders, people of color, and non-English speaking immigrants. Both attorney’s also collected information to turn over to the Housing Justice Section.

The residents made complaints of poor conditions they observed in the building and alleged housing code violations. Several residents pointed out sightings of mice, leaking in apartments and shoddy, slow maintenance. A lady said that when she moved into her apartment, it had clearly not been cleaned from the previous resident and her carpet was visibly filthy. After the meeting, Ms. Richmond took me around the lobby and pointed out cracked or missing baseboard trim. I motioned to sit in the lobby and she quickly stopped me, simply saying “bedbugs.”

But the residents’ issues did not stop at structural and maintenance issues. At least two residents described being overcharged or charged market rate for their apartments with little explanation or slow rectification of the issue. The senior residents have to go through a confusing recertification process with some online components that aren’t tailored to the needs of elder citizens. Access issues abound with the building supplying only two computers to a building of 171 residents. Access issues continue:

A majority of the residents are people of color, overwhelmingly Black, with East African residents making up over half of the population. Language access is also a huge concern. To facilitate the meeting, Ms.Richmond requested two translators from the Attorney General’s office to translate the meeting into Amharic and Tigrinya. One Amharic speaking resident remarked that it was her first time understanding what was going on. Translations into Amharic and Tigrinya are nearly impossible to come by; the Dunbar apartments do not hire bilingual staff and important paperwork is almost always entirely in English. One resident, who is bilingual, said he often has to help his neighbors with translations. Mr. Richmond said that, on one occasion, a janitor was asked to serve as a translator. This is entirely inappropriate because many residents have to share personal identifying or financial information that needs to be kept as confidential as possible.

There is a consistent disregard for the personal information of the residents, with envelopes marked with social security numbers and other important information often left out in public places for residents to retrieve.

What the residents described to the attorney general’s office was totally unacceptable and the residents have clearly had enough and are ready to organize. Many have caught word that there is an alleged potential sale of the building, which makes this a matter of gentrification and displacement of elders of color. Ms. Richmond mentioned that at their first meeting, SPOs called MPD on them, claiming they could not gather in their own community room. Luckily, the incident did not escalate since the residents are literally paying to live there and use the community room, but we cannot forget how cops and landlords work together to displace communities.

Despite these ridiculous conditions, the community in the Paul Laurence Dunbar tenant association have created a network of support where they are willing to care for one another. They step up where the landlord fails to from providing translations for each other, to showing up to their tenant association meeting to get the facts straight with the attorney general’s office. Even over the course of the meeting, I saw neighbors guiding one another through the sign-up sheet and helping their neighbors with disability issues. This is a strong community. And they’re organized.

The Washington Revolutionary will continue to cover this tenant’s association as developments occur.