The Parallels Between Two Occupied Nations: Ukraine and Palestine 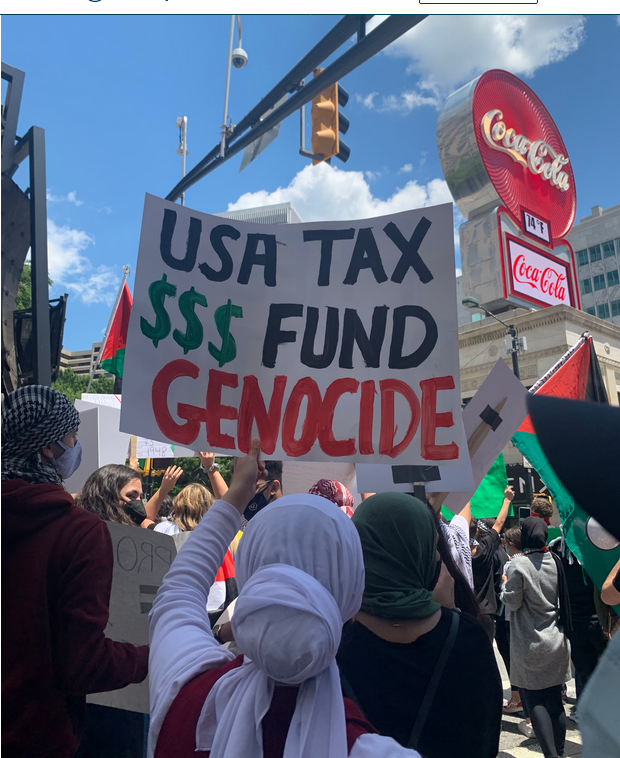 Over the last few weeks, news channels and feeds have been flooded with news coverage of the Russian invasion of Ukraine. It is undeniable the damage caused by the Russian army has been brutal and destructive, displacing over 1.5 million Ukrainians from their homes. The reaction to Ukrainian refugees has been welcoming in Europe and the United States.

Poland, a country that has refused to give asylum to Muslim refugees because it would be “a problem to their homogenous society,” has accepted approximately 700,000 Ukrainian asylum seekers. Poland’s stance on refugees is based on whether refugees meet their standard of homogenous, in other words, Whiteness.

Their second stance on asylum seekers harbors Islamaphobic and xenophobic sentiments that don’t view Muslims and other people of color as worthy of escaping the atrocities of war. These distinctions do not compare each group of refugees between who is worth surviving and who isn’t. All asylum seekers should have the right to live in a safe place. Instead, it shows the lack of empathy for asylum seekers who don’t meet European standards of society.

Anti Blackness in Eastern Europe is evident as Ukrainians fleeing the war keep hundreds of Africans and other people of color stuck at the border, many of whom are students. These groups running from the war in Ukraine are experiencing racism and are not well received in Poland, resulting in many being stuck in freezing weather and at risk of losing their lives.

Ukraine is not unfamiliar with racism and anti-Blackness as the country welcomed Nazis in World War II. The Nazi group ended up killing millions of Jewish and non-Jewish Ukrainians. In 2014, a neo-Nazi group emerged, Azov Special Operations Detachment, known as Azov Battalion, was found to have connections with Ukrainian authorities and the U.S. A year later, the Central Intelligence Agency (CIA) trained Ukrainians for war. Neo-Nazi groups have been used by the U.S. and Europe to “foster extremist forces” in Eastern Europe against Russia.

A little more than 2,000 miles south of Kyiv, Ukraine, is Palestine, a nation fighting the occupation of their country for 75 years. The violent Israeli occupation is ongoing without any media coverage from the West. Since President Biden has been in office, more than 1,000 homes have been demolished. Approximately 1,300 Palestinians, the majority of who are children, have been displaced.

The Jewish National Fund is a program funded by the U.S. and Canada to develop projects on Palestinian land which can label them as “Jews only.” The program also gives Jews sociopolitical influence over Palestinian land. To be antiwar should mean to be anti-all wars. The U.S. remains hypocritically quiet about the Israeli apartheid of Palestine territory while at the same time funding it. At this point, ceasing fire would not stop the occupation as Israel is trying to make it systematically impossible for Palestinians to claim their homes.

Both Palestine and Ukraine are defined as nations because they share a national identity, culture, and common goals. Both countries have endured ethnic cleansing. Both groups of people deserve to live on their land without fear of displacement and war.

The West has made it taboo to be against the Israeli occupation because any criticism of Israel is labeled anti-semitic. Citizen journalism is doing most of the work in changing public opinion by covering daily violence in cities like Sheikh Jarrah and Nakab, places where Israeli forces terrorize Palestinian communities. Global public opinion is changing as more people become aware of the daily attacks on Palestinian citizens, including many Jews who support Palestine and condemn Israeli occupation.

Imperialism is the underlying symptom for both Palestinian and Ukranian occupations. White supremacy gives life to imperialist projects as they look to gain military control over more nations through agreements like NATO. To be anti-war means the dismantling of NATO, which fuels more militarization, and ending the Cold War with Russia. In the same vein, the U.S. needs to end its support of Israeli occupation and sanction Israel for all the destruction made to Palestine to apply pressure into seeking a diplomatic outcome. The struggles of the Global South are intertwined as they are a living product of imperialism. Countries in the Global North owe all displaced asylum seekers a place to live free from the war as they are the main actors in creating chaos.