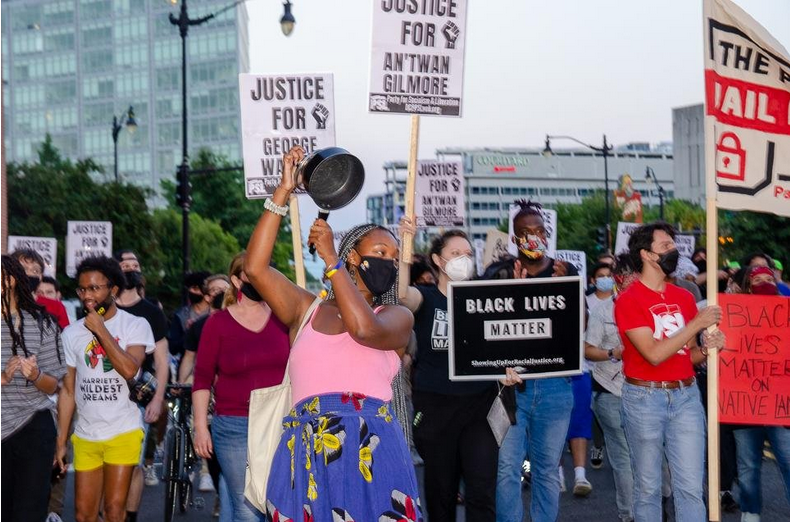 At 3:00 am on August 25, 2021, 27 year old An’Twan Gilmore fell asleep at the wheel of his car on the corner of New York and Florida avenue in North East Washington, D.C. His foot on the brake, the car remained motionless. At some point in the morning, 911 was called with reports of someone possibly unconscious in a BMW at the intersection with a firearm visible in his waistband. When MPD arrived, they sent eight officers to investigate, one produced a ballistic shield and positioned himself by An’Twan’s driver-side window while the other stood around the sides and back-end of the vehicle. Startled awake, An’Twan removes his foot from the brake, allowing the car to move forward. Within seconds, Sgt. Enis Jevric empties ten shots in the back of An’Twan’s rear window, fatally injuring him and sending the vehicle into a nearby tree

An’Twan Gilmore is dead. An’Twan Gilmore was murdered by MPD after he fell asleep in his car at 3:00 in the morning. The only reason The Washington Revolutionary can give an accurate recount of his death isn’t due to police footage, it isn’t due to Chief Contee’s press conference, nor is it due to the initial stories published in traditional news sources. The only reason we can give an accurate report on the incident that unfolded on August 25th is due to cell phone video posted to social media.

The story of An’Twan’s murder at the hands of MPD reveals a grotesque intersection of police brutality, gentrification and the thin blue line of silence that produces false narratives after incidents like this. After MPD failed to secure the scene during the reported 15-20 minute confrontation between eight police officers and a sleeping man, the ensuing police report and press conference attempted to frame Gilmore as an armed man and the incident as a type of standoff. For example, the initial NBCWashington article published after An’Twan’s murder – based on information provided by MPD – is titled “DC Police Fatally Shoot Armed Man.” Within the now-corrected article, police stated that An’Twan held the gun at some point before he was shot. Chief Contee goes on to state in a Wednesday press conference: “[Officers] attempted to wake the individual. At some point he awakened, and at that point, that individual was engaged by officers, and at some point, from there shots were fired,” Contee later states that is it unknown if Gilmore ever reached for or drew the weapon. This reporting is consistent through multiple outlet’s coverage of the killing. Unfortunately, or conveniently, the police body cam footage closest to An’Twan is obscured by the ballistic shield held by that officer. MPD later admits that EMT first-responders found An’Twan with the gun still tucked in his waistband. These initial news reports corroborated MPD’s lies with no skepticism. We should know better by now.

Buried in Contee’s passive voice and multiple “some points,” is the reality that is revealed in a cell phone video taken by a woman, Jordan White, who happened to be across the street during the incident. In the footage, viewers can plainly see officers tapping on his window with guns drawn, the car lurch forward – not threatening any nearby officer’s safety, and Sgt. Enis Jevric begins to immediately shoot into the car. MPD’s story was a lie.

The killing of An’Twan Gilmore by Sgt. Enis Jevric proves the multiple ways that the police fail to keep us safe. The Washington Revolutionary, as an abolitionist publication, has consistently pointed out how modern policing fails to prevent crime and, in most cases, only has the capacity to intervene after damage has been done. What is tragic about the case of An’Twan Gilmore is that a so-called crime did not even take place. An’Twan Gilmore was asleep. The untouched gun in his waistband is a red herring and a distraction in any discussion of this incident. This is about the criminalization of Black men by the state which allowed falling asleep to be approached like it was an armed hostage situation. When the 911 call came in that someone was asleep at the wheel – rather than logically rectify the situation by calmly waking Gilmore up in person or with a loudspeaker, ensuring that he was not having a medical emergency, and facilitating him moving his car out of the intersection, witness video shows him surrounded by armed men with shields. This is about a complete lack of human empathy from one human being to another. Despite one officer’s warning that Gilmore might be scared and MPD’s own policy against shooting into a moving vehicle, the remaining officers, including the one who suggested Gilmore’s fear, surround him, peer close enough into his tinted windows to even see the gun in his waistband, then proceed to escalate the situation which ended with ten bullets shot at a man who had awakened in fear.

Following the killing of An’Twan Gilmore, his family took to the streets to demand justice. They have been consistently facilitating nearly-daily marches, large and small, demanding justice for his murder. Last week, they published a list of demands. Gilmore has consistently been supported by family: cousins, god-family, individuals who considered him a brother, as well as small nieces and nephews who led their own protest this past Thursday, September 2nd. The outpouring of familial support and members of the Black community and abolitionist community in DC truly shows us how when police take a member of the community, they are polluting an emotional ecosystem and deep networks of support. During a large march which took over Florida Avenue from New York Ave to the U street neighborhood, one speaker from [BLMDC?] suggested that An’Twan was also a victim of gentrification – A Black man that supposedly did not belong in the rapidly changing so-called NoMa area of D.C.

Now called NoMa, meaning North of Massachusetts Ave, this section of NE was once 85% Black. Now, the neighborhood’s demographics are far different with the section bordering Massachusetts being over 50% white. The northern part of the area has a Black population in the 60 percent range, but poverty rates have remained high since the 1980s. No wonder Black men get the police called on them for falling asleep at the wheel. One of the most violent issues of the halflife of gentrification is over policing and frivolous 911 calls. In gentrified areas across the U.S., Black residents constantly complain about having cops called on them for congregating on the corners they’ve called home for years, walking their dog, engaging in their own culture of dirt bikes, ATVs, and loud GoGo music – the sights and sounds of a community. For An’Twan Gilmore – he made the common mistake of simply existing while Black in a neighborhood that no longer wants people that look like him around. The police approached him with such extreme aggression because over policing and criminalization is just one part of the multi-pronged approach that drives Black people away from cities like D.C. and the surrounding DMV area.

Then it must not be lost on readers, as we watch the development of this case, that MPD Sgt. Enis Jevric had or has a secondary job as a real estate agent throughout DC. Jevric has listings through Samson Realty as recently as January of 2021 in NW and SE. Not only is Sgt. Jevric responsible for the killing of An’Twan, he is also a part of the machine of development that is selling DC to the highest bidder while the Black and Brown Washingtonians that historically called The District home are priced out of communities of color. The violence represented by An’Twan’s death is the most dangerous intersection of police violence and gentrification.

Any solution to police violence must not only include abolition of the police – but a stop to the gentrification that financially empowers police to wantonly murder Black men in women for the sake of property and profit.

The Washington Revolutionary demands accountability for An’Twan Gilmore, George Watson, Deon Kay, Karon Hylton-Brown, and every other Black life taken by the system of pervasive racial capitalism which justifies the persecution of Black life. But we also demand that you, our readers, commit to progress, community, and radical imagination every day to solve these issues. It is never enough to say their names, or call our councilmembers, or march in the streets. We must get closer, more radical, more angry, and more determined if we want to end brutality and systemic racism. Abolition starts with you and I and changing how we interact with our communities. We must love each other and support each other. We have nothing to lose but our chains.