Russian anti-military arsonists: "There are more of us every day"

Note: if you are planning to commit this form of direct action, we strongly recommend reading The Writings of an Arsonist 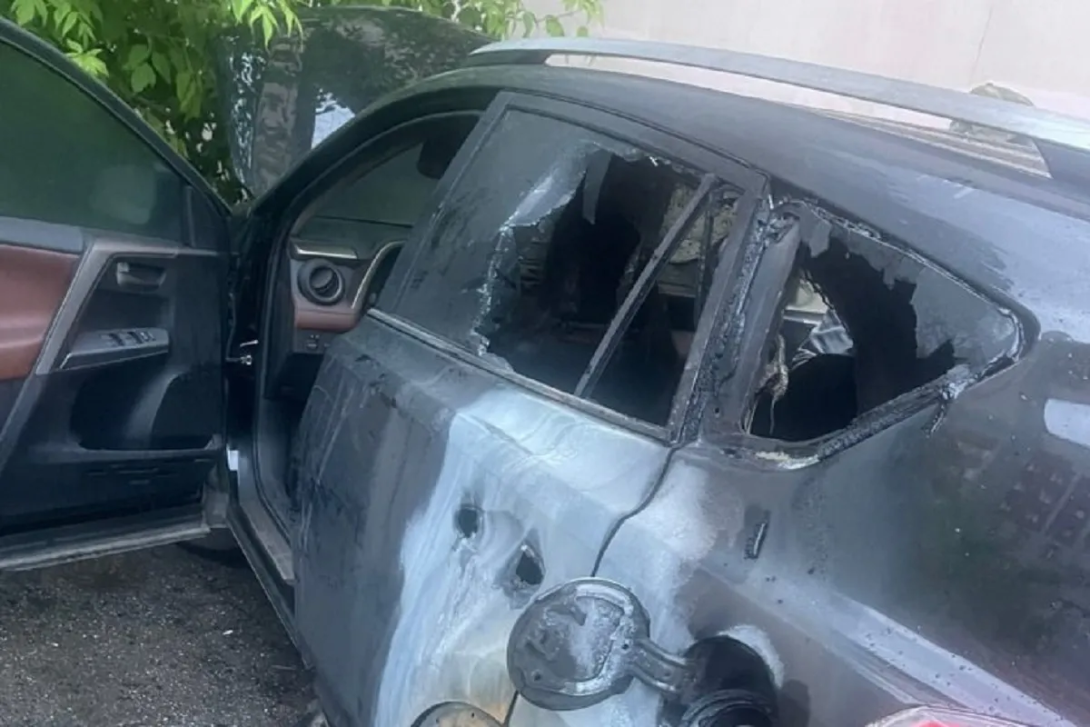 In the the early hours of June 11, an anarchist cell in the Volga region torched the Toyota belonging to Natalia Abiyeva - a Russian Army officer's wife and organizer of the foundation in support of the invasion forces.

You stated quite harshly that there were no means left for a peaceful protest in Russia. Why do you think so?

We are extremely suspicious of peaceful methods of protest, as we believe that the time to change something in a peaceful way has already passed. Now such calls look either pathetic or as a provocation. Calling to go to rallies is almost equivalent to calling on the cops to throw themselves into the hands. It was possible to change in a relatively peaceful way somewhere during the times of Bolotka [2011-2013 protest movement in Russia named after Bolotnaya square in Moscow], but then the opposition shouted "We will come again". Now there are few options left: either run or fight. We do not consider the option to sit and pretend that everything is as it should be. Russia is a totalitarian hell, a prison of peoples and a homeland of injustice.

In your report, you called yourself a revolutionary cell of the Volga region. Are there similar groups in other Russian cities?

We have like-minded people in different parts of the country. We cannot disclose their number and location for security reasons. But you will hear about them later.

You said that "the dictatorship should be replaced by a society based on the principles of freedom, equality and solidarity" - are you adherents of anarchist views?

We are united by the idea of ​​freedom and the Molotov cocktail. Now is not the time to sort out political views. There are both anarchists and right-wingers in our ranks (although there are fewer of them for obvious reasons). An action today is a reflection on the political order of tomorrow.

It would be too pathetic and arrogant to say that we are not afraid. Everyone is afraid, which is why they adhere to strict security measures and secrecy. Who knows what's worse: being beaten in the ward or living your miserable life with guilt that you didn't even try to change something?

What can ordinary Russians do today who do not support the Kremlin's policy?

Not everyone is tough enough to go with Molotov to the enlistment office or burn a vehicle to the beasts guarding the regime. But everyone can take a photo and anonymously send along with the coordinates to the right people. Or collect information about beasts, print out leaflets, stick stickers, draw graffiti, supporting resistance. Sabotage at work in the relevant structures is no less important. It is not necessary to refuse military service if you can learn a lot of valuable information through this. It is not necessary to resign from law enforcement bodies if you can sabotage new cases to capture activists. Or leave the railway, seeing trains of equipment going to kill people in a neighboring country. Everyone must find their place in the Russia of the future, become this future today, and not leave Russian hopelessness as a legacy to children.

Military recruitment centers are being attacked all over Russia, guerrilla actions are taking place on the railway tracks.[1] Will the geography of partisan resistance in Russia expand, or will the Kremlin's repressions be able to suppress them?

Of course, the propaganda machine today is making every effort to expose the partisans as crazy loners. The number of blocked websites has increased, but in parallel, free channels for the dissemination of information have also flourished, Telegram has become the most popular messenger in Russia. But military recruitment centers burn every week, trains derail from the Kuban to the Far East, cables from zombieboxes are cut at the entrances. The geography of resistance will only expand, because everyone has just begun to taste the delights of life in a new reality: total lack of freedom, a swooping economy, an Iron Curtain. The fire of the revolution will spread throughout the cities of Russia. We want a normal future - and there are many of us! And there are more of us every day.

The Russian media often talk about the so-called "pops" in the Belgorod, Kursk and Voronezh regions. Do you think that the Ukrainian army strikes at Russian cities?

Will answer with sarcasm. If there is no "war", what kind of shelling from Ukraine is possible?

After the Russian attack on Ukraine, Belarusian troops appeared, which are fighting against Putin's occupiers. On the Russian side, there is also the Legion "Freedom of Russia", which went over to the side of Ukraine. Are there like-minded people in your ranks who have decided to go to the front?

Among our comrades there are no servicemen of Putin's army. Personally, we do not know those who would have had time to leave Russia and join the Russian volunteers in Ukraine. And since the end of February, this has been almost impossible due to closed borders. So we urge everyone who is thinking about this to do affairs in their homeland. The future of Russia will be decided in Russia. This is our land, we have nowhere to run, let the scum be afraid and hide in their palaces. The future belongs to us!

If Abiyeva [Russian military foundation director] was left without a car, decides to buy a new car, will it burn too?

Patriot Abiyeva will probably acquire a model from the domestic auto industry. And the safety of these machines is highly questionable. Who knows.

How does the fact that Russia has no obvious successes in this war affect the Russians?

It seemed that they should have taken care of the fact that compatriots are returning home in thousands in zinc coffins and packages. The fact that every day of hostilities is a colossal amount of money that could be used to build schools and hospitals. But the strength of Putin's power lies in propaganda.

To our regret, the influence of propaganda is much more comprehensive than one could imagine. Believing propaganda is not only about reading Kadyrov and wearing Z-symbols. But also not to understand the nature of the sanctions, the Iron Curtain, the falling standard of living. Putin turned the whole world against Russia, and they are happy. But above all, propaganda is a trite belief that you are a small person and are not able to change anything. This is where things get worst. 140 million people convinced that they can't influence anything.

So to speak. Ukraine is obliged to win, since any concessions will be regarded by Putin as weakness. This means that a repetition will be inevitable, and blood will be shed again.

What would you wish our readers?

Survive until victory over the tyrants. And put your own effort into it! Take action!