Russian nights are getting hotter and hotter! The conscience of the people is awakening and we observe how it is happening. Title photo is from Nizhnevartovsk. Please support the virtual media center for community restoration activity in destroyed frontline Kharkiv. To donate you are welcome to this page.

As we predicted in the previous issue of this survey, Kremlin did not dare to openly declare a general mobilization. However the protracted war of attrition is forcing both sides to throw increasingly less prepared reserves into battle. The Black Sea Fleet of the RF, for example, sends personnel to land as marines as much as possible - after all, due to huge losses, the ranks of the 810th marine brigade from Sevastopol are formed actually anew after extermination during the Mariupol assault, its commander was killed there too. Authorities are feverishly trying to make up for the losses with "hidden mobilization". Now Russia is replenishing the invasion troops by recruiting oftenly unskilled mercenaries, promising them 300,000 rubles a month along with credit amnesty, and today it became known that a bill was submitted to the Russian parliament to abolish the upper age restriction for contract military service. Now it is 40 years for Russians and 30 for foreigners.

Nevertheless, rumors continue to circulate about the preparations of Russian regime for a general mobilization despite everything listed above. Social networks and media space filled with recommendations and lifehacks about avoidance of military service. And attacks on enlistment offices follow one after another. If in the first two months of the war there were only five such acts, now they have reached at least twelve! Arsonists are usually not found, that indicates inability of the state to prevent and stop most of such attempts at the stage of preparation. Since there is no electronic database of conscripts in Russia, the burning of papers paralyzes conscription in the jurisdictional territory.

On the night of May 3, was set on fire the military recruitment center in Nizhnevartovsk. As we can see on this movie, attackers torched its entrance by Molotov cocktails, but cops came to the call soon and put it out with fire extinguishers. Another unused cocktail was found at the scene. A week ago, two suspects were detained, criminal cases are initiated under two articles on "hooliganism" and "intentional damage to property." Оn the night of May 8, two persons threw several Molotovs into the window of the military enlistment office in Cherepovets and made a such video about it. The destruction is not very large - two window frames were damaged by flame, the exterior decoration of the building was smoked. On the evening of May 10, a Molotov cocktail flew into the window of a similar facility in Balashikha. A fire started in the corridor, the fire was unfortunately extinguished by a guard who came to the rescue, but the arsonist was not captured. In addition to Balashikha, this office is also responsible for conscription in the neighboring town of Reutov. 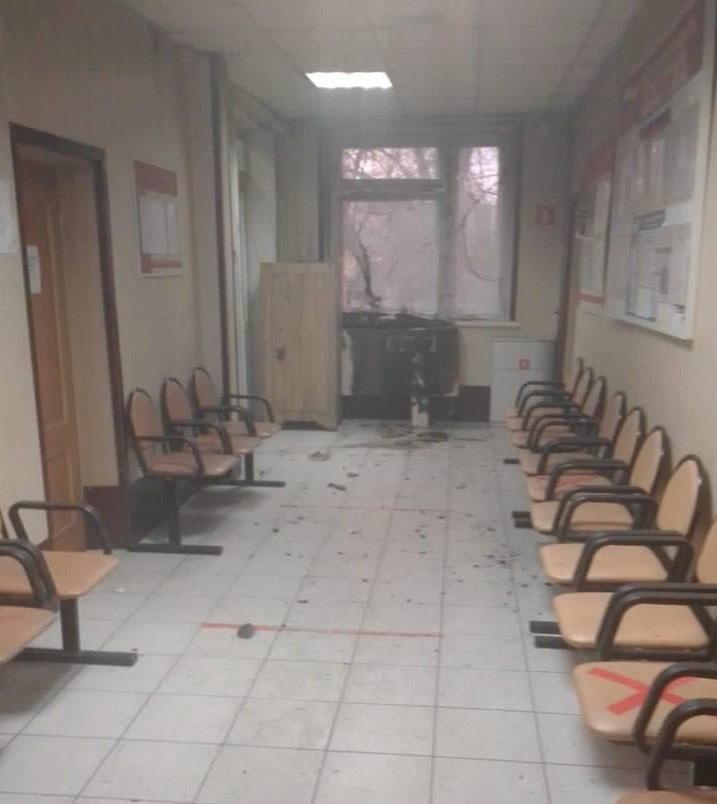 On the night of May 13, unknown ones threw several Molotov cocktails into the windows of the enlistment office of the Central District in Omsk. At least two windows were broken. A fire caught an area of 30 square meters and some archival documents were damaged.

At about 2 a.m. on May 13, an attempt to burn down the military recruitment office also took place in Gukovo, near Rostov. Molotov cocktail smashed against the wall of the building. The visitor, according to the official wording of the state media, "disappeared in an unknown direction." 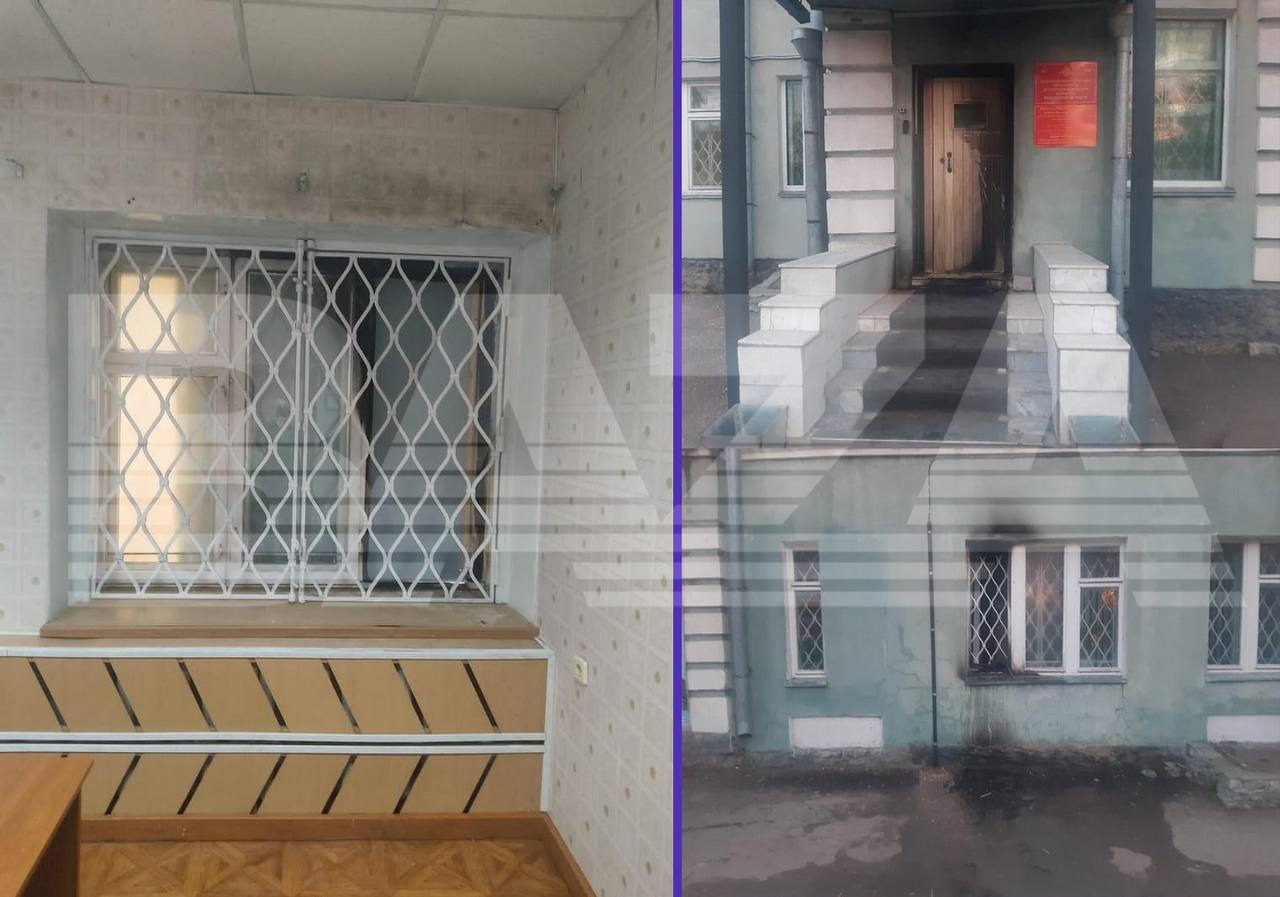 And after the similar things in Pronsk

On the night of May 15, at least one bottle of inflammable mixture was received by the enlistment office in Volgograd. A fire covered about 20 square meters of the premises. Just an hour later, was reported about an attempt to set fire to the door and window frame of such office in Pronsk (the Ryazan region). The fire did not spread. On the night of May 18, became the target a military recruitment center in Shchyolkovo near Moscow. Two offices are seriously damaged, including the archive with the data of conscripts. On this video we see smashing of its windows, after which the partisan pours incendiary mixture inside. Then comes the arson. In all this cases, the punishers did not seize anyone.

But on May 5, a criminal case was initiated against 19-years-old anarchist Denis Kozak from the Rostov region for "public calls for terrorism on the Internet". The penalty is up to 7 years in prison. Denis conducted anti-war agitation on VKontakte, where cops found his comment concerning the Arkhangelsk FSB office bombing 2018 with "justification of Mikhail Zhlobitsky". It was not difficult for them to find him, and special forces raided his house in the village of Mokry Gashun. They distribute slander that he shares the ideology of Nazism and fascism or acted on orders from Ukrainian state securities. The expertise, of course, confirmed that "the materials posted by Kozak contain statements about the recognition of the ideology and practice of violent and/or destructive actions as correct and in need of support." Now Denis is under non-departure signature. Two months ago, we also wrote about the capture of two anarchists in Tula suspected in vandalism of cars with Z-swastikas. 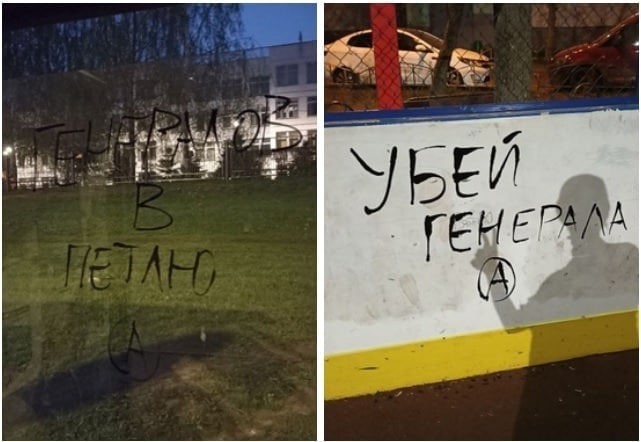 As we already reported earlier, on some Moscow anti-war rally on March 6, two guys were detained with incendiary device's components. According to investigators, as it turned out, Vladimir Sergeyev and Anton Zhuchkov wanted to set fire to empty paddy wagons with Molotov cocktails found in Sergeyev's backpack. During the arrest, both took a lethal dose of methadone. They spent a week in intensive care and were barely pumped out. In their testimony, Anton and Vladimir also declared their intention to commit suicide.

Sergeyev explained his act that he wanted to take his own life, because he was “ashamed of what is happening in Ukraine now,” and Zhuchkov, during interrogation, said that he tried to poison himself because he “didn’t want to see what was happening in the world: war in Ukraine, events in the Donbass. I was also afraid of nuclear war. I wanted to take my own life because I didn't want to see what would happen next." At first they were accused of "preparing for hooliganism", which threatened a relatively short term - up to 3,5 years. But after the FSB became interested in the case, the charges were toughened: now it's "preparation for a terrorist attack", which threatens up to 10 years of imprisonment. To pay for a lawyer for Vladimir Sergeyev, 200 000 rubles are required for the preliminary investigation period. Thanks to relatives and caring people, 150 000 have already been raised. Payment details for another 50 000 are in this post.

20-year-old communist Ruslan Abasov and 22-year-old anarchist Lev Skoryakin have been kept in jail for almost five months after a peaceful rally against political repression near the FSB headquarters in Moscow. Previously, they were together in the Butyrka pre-trial detention center, and Ruslan was constantly transferred from cell to cell for agitating his cellmates. Due to his transfer to another detention center he disappeared from communication, a lawyer managed to see him on May 18 and found out what happened. This time Ruslan was transferred due to a state of health. He fell seriously ill with meningitis and spent a long time in intensive care. Resuscitation is a separate story: he was lying there in handcuffs and under escort! Luckily, he survived and is making a slow and difficult recovery. Moscow leftists gave him dairy products to somehow restore immunity after antibiotics. There is not even a hope that Ruslan's preventive measure will be mitigated due to illness. As the Black Book of Capitalism notes, in the classical novel "The Gadfly", a seriously ill revolutionary was tied with belts to a bed in prison too. It was in 19th century Italy - and this is Moscow of the 21st century!

So, David was not afraid and went out to fight Goliath. Аs the war further gets to be positional, the social struggle in the rear will flare up more and more brightly. The spontaneous people's guerrilla has begun and seems to be growing.

Finally, this week we have seen a new phenomenon in the occupied part of Donbass: women's protests in front of enlistment offices demanding the return home of husbands and sons forcibly mobilized by the Russian proxies. See a material on the heavy defeat of these recruits near Kharkov and bestial conditions described by their relatives. From other hand, we add a such report about exploitation of the local staff in Médecins Sans Frontières and their low efficiency compared to Kharkov self-organized volunteers.

Info from the actions in solidarity with revolutionaries in Russian torture-chambers is welcome to assembly-media@riseup.net

Freedom to conscripts! Weapons to the people!

Russian anti-military arsonists: "There are more of us every day" — assembly.org.ua