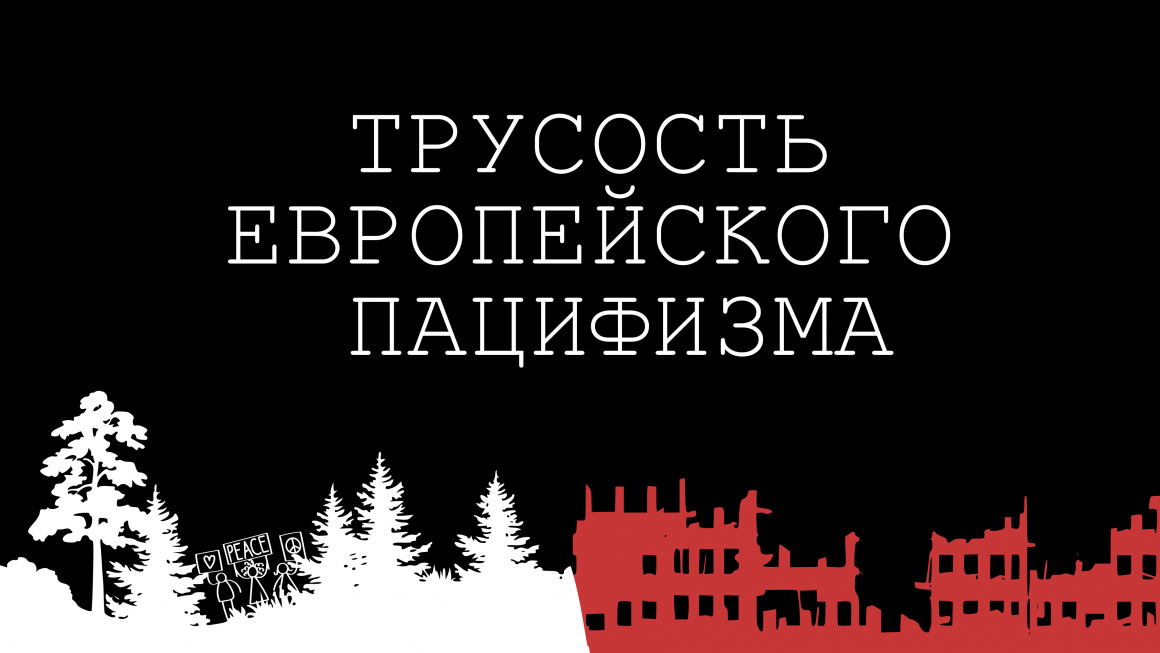 While this piece focuses its righteous ire at European "pacifists" and the European left writ large, it could equally apply to much of the 'left' in the so-called United States. We mean here every tankie group and so-called peace activist, willing to sell out someone else's home in the service of a fundamentally unjust "peace" that serves only reward aggression and plant the seeds of a future conflict. Especially those groups like Code Pink who co-organize events with neo-Fascist Boogalo Boys, Marxists who glorify Xi Jinping or Hugo Chavez as the vanguard of authoritarian-socialism, or those aged hippies who advocate "community control of the police."

Their moral bankruptcy has never been made more plain by their refusal to stand against a brutal war of unashamed imperialism, even more so for those who wrap themselves in the banner of "peace at any price."

After all, the price of peace won't be paid by them.

Solidarity is our weapon!

for more information on how to support Anarchists in Eastern Europe, please see: edist.ro/solidarity

Eight months have passed since the start of the full-scale invasion of Ukraine by Russian troops. Tens of thousands of people have been killed, many towns and villages are in ruins, and the torture of the Kremlin regime in the occupied territories continues unabated. Nevertheless, among Western anarchists and leftists the voices of pacifists continue to be loud. Those who call on Ukrainian soldiers to lay down their arms and stop resisting the Russian invasion.

It would seem that eight months is enough time to thoroughly study the issue of the war and to understand the balance of power and the meaning of surrender for Ukrainian society. But pacifists ignore reality and insist on some magical world in which they support thousands of defectors from Ukraine/Belarus/Russia while setting aside the political reality of the region. Western pacifists, hoping to somehow intervene in the conflict, begin working with dubious organizations from Belarus and Russia.

In the case of Belarus, we are primarily talking about Olga Karach, who since March has been leading a campaign called “no means no”[1]. Karach is known for her grant money laundering schemes through “Our House” (Nash Dom). Only now the division of European grants has become much more complicated, and the EU support in Ukraine goes primarily to Ukrainian and European NGOs, not to Belarusian ones. But it is not a problem for the initiative Karach, because there are enough people in Europe who are ready to donate thousands of euros to help the Belarusian military draft dodgers. And we are not just talking about people, but about European leftists and anarchists actively raising money for the defectors. The left’s support for “our home” reaches such an absurd level that activists in Berlin illegally held an ad busting campaign[2] advertising a “no means no” campaign with an appeal to donate money there.

And Olga knows how to satisfy the hunger of pacifists – from a personal conversation with one of the German leftists working with “our house,” we learned that Karach managed to help tens of thousands of Belarusian deserters who have left the country since the war began. Who these people are remains a mystery, but there is no doubt that Karach has a separate budget collected from the European Left for each deserter.

Olga Karach is not the only case of attempts to raise money for her own projects under the guise of the war in Ukraine. We have told about her because for us this case is the most known and the organization itself has long been known to Belarusians, but is little known in the European environment. So if you donate money to support certain groups resisting the Russian invasion, don’t be lazy and contact your comrades from the region for more information on the situation. Otherwise your efforts will be used by people whose goals are very far from your own.

Our house, like some other groups (KRAS-MAT, for example), creates a reality in which supporting defectors here and now can affect the war. It can’t. And if in 8 months the pacifists couldn’t figure that out, it’s hard to imagine anyone being able to change their minds. The amount of political or social defection is so insignificant that it is strange to even begin to talk about it. Yes, thousands of Russians fled Russia after the announcement of mobilization, but even if we ignore the fact that some of these fugitives were still riding the streets of Moscow or Irkutsk with “Z” yesterday, there is still a huge number of “patriots” in Russia who would rather die in Ukraine than rebel against the Kremlin. The protests in Russia’s regions that began in the first week of the mobilization were suppressed, and without support throughout the country, local pockets of resistance are doomed to fail.

Many of us hoped that Russian residents would rise up when Russian troops began bombing major Ukrainian cities. Or when the horrors of Bucha were published. Or when young people in Russia began to be drafted to the massacre in Ukraine. But only a few rebelled, the mothers of conscripts from Dagestan and Yakutia, while all of Russia remains silent. Mass desertion in the Russian troops will only begin when tens of thousands of soldiers sent by Moscow are killed every month in Ukraine. Until that happens, the deaths of 100,000 or even 200,000 Russian citizens are nothing to Putin and not enough for Russians to overthrow the tsar.

In numerous conversations with European pacifists online and offline, we have long tried to understand the reason for ignoring reality, in favor of a convenient fairy tale. And recently an understanding has finally arrived. Many European pacifists, through their political stance, justify their own outright cowardice. The fear of destroying a comfortable peaceful corner of Europe, built, among other things, on the exploitation of the rest of the planet, is now becoming the main reason for calls to lay down their arms. Even the smallest possibility of violence against the so-called first world automatically leads to leftist and anarchist pacifists willing to sell out their own comrades for life in a peaceful region. Moreover, pacifists are willing to sacrifice tens of thousands of people in Ukraine who would be destroyed by the Russian regime in the event of a triumph.

Cowardice in the first months of the war led to complete inaction on the part of the pacifists. Loud statements were written and money collections were started on those very deserters, but really no solidarity was forthcoming. The situation began to change as inflation in the West increased. Today, the voices of those calling for diplomacy or strategic defeat are even louder, as the war has really begun to hit the pockets of the European middle class (to which most of these same pacifists belong).

Of course, there are also ideological pacifists in Europe. But even from their midst we have not yet seen much action. These people prefer to sit in the comfort of academic circles and discuss war, NATO, and imperialism. We have never yet seen any pacifists willing to go into Ukraine and stand between the tanks of Ukrainian and Russian troops or to agitate Russian troops to leave the occupied territories. We have not seen a single Western pacifist willing to risk his own freedom and safety by going to Russia to agitate soldiers to defect or resist mobilization.

International solidarity is a difficult job, requiring a considerable amount of not only organizational effort, but also political education, to understand what that solidarity means in an individual situation. Fortunately, some European anarchists have chosen the path of true international solidarity, whether it is helping refugees from Ukraine and other war-torn regions, or directly supporting progressive forces fighting the war.

While we criticize pacifism, we remain opposed to militarism, the ideology of the state aimed at developing its own military power. Primarily the Soviet militarism with which we were forced to grow up even after the collapse of the USSR itself. The very same militarism that made this war possible. And for us the only possible anti-militarism at the moment is the destruction of the military might of the Russian state, which threatens the complete destruction not only of the regions of Ukraine, Belarus, Kazakhstan and other countries of the former empire, but of the entire planet.

We support our anarchist comrades who have taken up arms to fight the Russian aggressor as well as the resistance in the occupied territories against Putin’s regime.

[1] "No means no” is a slogan used by campaigns against sexualized violence across Europe, but this did not deter Karach from using the slogan in her own schemes.

[2] Ad busting is the action of destroying or altering a billboard or other large annoying advertisement. Often done to combat rampant consumerism.