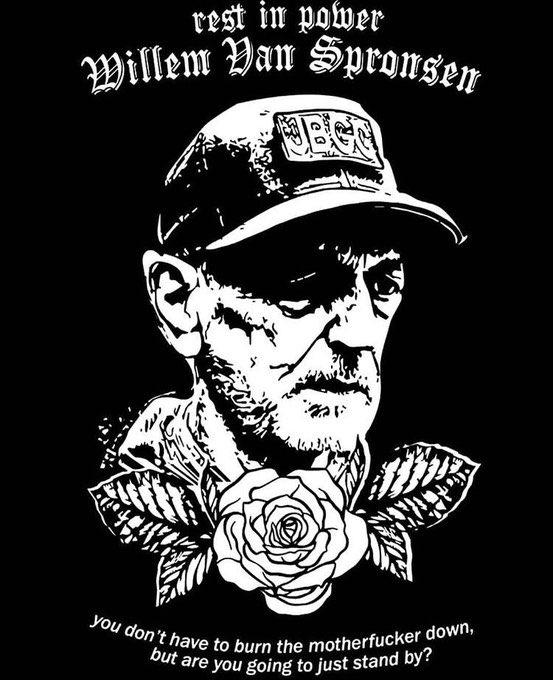 On July 13, Willem Van Spronsen was killed by police while apparently taking action to disable the fleet of buses that serve the Northwest Detention Center, a private immigration detainment facility. His final statement, reproduced below, conveys that he was acting in response to the continuous raids and deportations carried out by Immigration Customs and Enforcement (ICE). His action occurred on the one-year anniversary of a hunger strike inside the Northwest Detention Center and an encampment outside.

We understand why Willem Van Spronsen decided to give his life to interrupt the violence that is perpetrated against undocumented people in the United States every day.

It is not hyperbole to say that the ICE raids are targeting our friends and neighbors, people who have lived and worked alongside us for years or even decades. The vulnerability of long-term undocumented people as a hyper-exploitable class has helped billionaires like Donald Trump to profit even more than they could have by legal means. To put the icing on the cake, capitalists then turn to the other workers they are exploiting and tell them that the poverty and misfortunes they experience are the fault of those who are poorer and more oppressed than them. It’s hard to imagine a more cynical strategy.

The disparity in rights between the documented and undocumented is a construct—just as the disparity in value that the Nazis constructed between Jewish people and gentiles was a construct. Both are mere inventions; they have no intrinsic existence except as a means for a powerful group to justify violence against a less powerful group. Those who justify obedience to the law as a good in itself stand alongside the Nazis whose laws condemned millions to the death camps, not to mention the racists who passed the Fugitive Slave Act and the Jim Crow laws in the American South.

Laws are just constructs. They have no value in and of themselves. They often serve to legitimize injustice that people would otherwise take action to oppose.

The further that the proponents of racist violence are permitted to legitimize invented concepts like slavery and citizenship, the more violence they will perpetrate—up to and including roundups, concentration camps, and mass extermination. We have seen this before, in Nazi Germany and elsewhere, and we are seeing it again today in the United States. The thousands of deaths that take place in the borderlands and the thousands murdered by police are just a foretaste of what is possible.

In this regard, the Jewish people who are carrying out blockades against ICE are engaging in rational efforts to prevent the recurrence of the same unthinkable injustices that were perpetrated against their ancestors—just as Willem Van Spronsen, who grew up in the wake of World War II, made the rational decision that the time had come to fight the rise of fascism just as people did in the 1920s, 1930s, and 1940s.

If more people had chosen to take action to fight the rise of fascism in Italy and Germany, the Second World War might have been averted, and with it millions upon millions of lives would have been saved. Let no one say it is “violent” to attack the infrastructure of ICE and the mercenaries who maintain it. The real violence is the complicity of the Good Americans who do nothing as their neighbors are disappeared, just like those Good Germans who choose to ignore what was being done to their neighbors in the 1930s.

Every day, mercenaries around the world risk their lives in service to the agenda of the rich and powerful, obeying orders thoughtlessly, squandering their capacity to think rationally, to feel compassion, to take responsibility for their actions. Millions of people kill and die every year simply to increase the wealth and power of the tyrants who manipulate them. Willem Van Spronsen chose to think for himself. He took personal responsibility and did what he could to put an end to what he recognized as injustice. He did not use the Nuremburg defense to excuse his actions the way that every police officer and prison guard does.

In those regards, what he did was heroic.

We recommend the statement about Willem Van Spronsen’s action posted by La Resistencia, a grassroots collective led by undocumented immigrants and US citizens based in Tacoma, Washington, and the memorial published by Puget Sound Anarchists.

“Anyone who is determined to carry out his or her deed is not a courageous person. They are simply a person who has clarified their ideas, who has realized that it is pointless to make such an effort to play the part assigned to them by capital in the performance…

There’s wrong and there’s right.
It’s time to take action against the forces of evil.

I have a father’s broken heart
I have a broken down body
And I have an unshakable abhorrence for injustice
That is what brings me here.
This is my clear opportunity to try to make a difference, I’d be an ingrate to be waiting for a more obvious invitation.

I follow three teachers:
Don Pritts, my spiritual guide. “Love without action is just a word.”
John Brown, my moral guide. “What is needed is action!”
Emma Goldman, my political guide. “If I can’t dance, I don’t want to be in your revolution.”

I’m a head in the clouds dreamer, I believe in love and redemption.
I believe we’re going to win.
I’m joyfully revolutionary. (We all should have been reading Emma Goldman in school instead of the jingo drivel we were fed, but I digress.) (We should all be looking at the photos of the YPG heroes should we falter and think our dreams are impossible, but I double digress. Fight me.)

In these days of fascist hooligans preying on vulnerable people in our streets, in the name of the state or supported and defended by the state,

In these days of highly profitable detention/concentration camps and a battle over the semantics,

In these days of hopelessness, empty pursuit and empty yearning,

We are living in visible fascism ascendant. (I say visible, because those paying attention watched it survive and thrive under the protection of the state for decades. [See Howard Zinn, A People’s History of the United States.] Now it unabashedly follows its agenda with open and full cooperation from the government. From governments around the world.

Fascism serves the needs of the state serves the needs of business and at your expense. Who benefits? Jeff Bezos, Warren Buffet, Elon Musk, Tim Cook, Bill Gates, Betsy de Vos, George Soros, Donald Trump, and need I go on? Let me say it again: rich guys (who think you’re not really all that good), really dig government (every government everywhere, including “communist” governments), because they make the rules that make rich guys richer.
Simple.
Don’t overthink it.

(Are you patriots in the back paying attention?)

When I was a boy, in post-war Holland, later France, my head was filled with stories of the rise of fascism in the ’30s. I promised myself that I would not be one of those who stands by as neighbors are torn from their homes and imprisoned for somehow being perceived as lesser.
You don’t have to burn the motherfucker down, but are you going to just stand by?

This is the test of our fundamental belief in real freedom and our responsibility to each other.
This is a call to patriots, too, to stand against this travesty against everything that you hold sacred. I know you. I know that in your hearts, you see the dishonor in these camps. It’s time for you, too, to stand up to the money pulling the strings of every goddamn puppet pretending to represent us.

I’m a man who loves you all and this spinning ball so much that I’m going to fulfill my childhood promise to myself to be noble.

Here it is, in these corporate for profit concentration camps.
Here it is, in Brown and non-conforming folks afraid to show their faces for fear of the police/migra/Proud Boys/the boss/beckies…
Here it is, a planet almost used up by the market’s greed.

I’m a black and white thinker.
Detention camps are an abomination.
I’m not standing by.
I really shouldn’t have to say any more than this.

I set aside my broken heart and I heal the only way I know how—by being useful.
I efficiently compartmentalize my pain…
And I joyfully go about this work.
(To those burdened with the wreckage from my actions, I hope that you will make the best use of that burden.)

To my comrades:
I regret that I will miss the rest of the revolution.
Thank you for the honor of having me in your midst.

Giving me space to be useful, to feel that I was fulfilling my ideals, has been the spiritual pinnacle of my life.

Doing what I can to help defend my precious and wondrous people is an experience too rich to describe.

My trans comrades have transformed me, solidifying my conviction that we will be guided to a dreamed-of future by those most marginalized among us today. I have dreamed it so clearly that I have no regret for not seeing how it turns out. Thank you for bringing me so far along.

I am antifa. I stand with comrades around the world who act from the love of life in every permutation. Comrades who understand that freedom means real freedom for all and a life worth living.

Keep the faith!
All power to the people!
Bella ciao.

Don’t let your silly government agencies spend money “investigating” this one. I was radicalized in civics class at 13 when we were taught about the electoral college. It was at that point that I decided that the status quo might be a house of cards. Further reading confirmed in the positive. I highly recommend reading!

The semi-automatic weapon I used was a cheap, home-built unregistered “ghost” AR-15, it had six magazines. I strongly encourage comrades and incoming comrades to arm themselves. We are now responsible for defending people from the predatory state. Ignore the law in arming yourself if you have the luxury, I did.