Towards a Collective Security Culture

How This Affects Us

How We Defend Ourselves

For as long as anyone can remember, the FBI has infiltrated radical communities in hopes of framing people on criminal charges. This has intensified in anarchist circles over the past few years. A handful of unfortunates now languish in prison, serving up to decades for actions they never carried out and probably would never have even considered were it not for the efforts of agents provocateurs. How does the government choose who to target? What factors put people at risk? Most importantly, what can we do to protect ourselves and each other?

Perhaps, gentle reader, you’ve never been part of a community targeted by the US government. Picture undercover agents attending your events with the intention of setting people up to be framed for illegal activity. Most of your friends and family would have the sense to keep themselves out of trouble, of course—but can you be absolutely sure everyone would?

What if someone fell in love with the agent and was desperate to impress him or her, and the agent took advantage of this? Every community has people in it who may sometimes be gullible or vulnerable, who may not display the best judgment at all times. And what if the agent provocateur is a person everyone trusts and looks up to? Government agents aren’t always outsiders—often, the FBI recruits or blackmails long-time participants, such as Brandon Darby and Frank Ambrose. Don’t underestimate these people; they’re cold-blooded bounty hunters ready to do whatever it takes to earn their paychecks, guided by experts with millions and millions of dollars of funding.

Perhaps you’re still saying to yourself “It would never happen—all of us are law-abiding citizens.” Sure you are, every last one of you. The US has 2.3 million people in prison, and over 5 million more on probation and parole—if there isn’t a single person in your whole community who has ever broken the law, you’re exceptional, and probably exceptionally privileged. Anyway, it doesn’t matter—your unfortunate friend or neighbor doesn’t even have to do anything illegal to get framed by the government. They just have to end up in a situation in which it’s possible to make it appear that they could have been considering doing something illegal.

Often the evidence is so tenuous that it takes the government multiple attempts to obtain a conviction. In an entrapment case resulting from the mobilization against the 2008 Republican National Convention, defendant David McKay received a hung jury at trial, only to be coerced into pleading guilty afterwards behind closed doors. In another recent entrapment case, it took two hung juries before a third jury finally convicted some of the defendants—prompting a law professor quoted by the New York Times to say, “It goes to show that if you try it enough times, you’ll eventually find a jury that will convict on very little evidence.”

Muslims and people who care about the environment are at the top of the list for operations like this; opponents of unaccountable authority are close behind. And here we arrive at the one significant difference between “law-abiding” white middle America and at least some of the communities currently targeted by the FBI: the latter are critical of the government. Who can blame them, considering?

How This Affects Us

There have been two instances in which people who attended a CrimethInc. convergence have been entrapped. Eric McDavid, Zachary Jenson, and Lauren Weiner met each other and an informant by the name of “Anna” at the 2004 and 2005 convergences, among other events. Anna drove them across the country, rented them a wiretapped cabin, bought bomb-making materials, and took advantage of McDavid’s attraction to her to pressure the group into discussions that resulted in McDavid’s conviction on conspiracy charges. Afterwards, Elle Magazine quoted regretful jurors as saying “the FBI was an embarrassment” and “I hope he gets a new trial.” In 2008, Matthew DePalma attended a CrimethInc. convergence in Wisconsin, at which he was approached by Andrew Darst, a federal infiltrator posing as a member of the RNC Welcoming Committee. Darst persuaded DePalma to assist him in manufacturing explosives, recorded conversations with him in a wired apartment, and drove him around to do research and purchase supplies. DePalma was indicted on felony charges for possession of “unregistered firearms,” and eventually pleaded guilty.

Besides these two cases, not one of the hundreds upon hundreds of people who have attended CrimethInc. convergences has been convicted of anything having to do with bombs or Molotov cocktails. These infiltrators sure are precise! Apparently, they can show up in a chaotic space filled with hundreds of people who don’t know each other, immediately identify the most dangerous extremists, and insinuate themselves into their closest confidence—all in a very short time. Next thing you know, the snitches are saving the day, narrowly rescuing ordinary citizens from terrorist attacks—which the criminals would have been about to carry out anyway, even if the agents provocateurs hadn’t befriended them, talked them into crazy schemes, and supplied them with all sorts of incriminating materials.

If you’re gullible enough to believe that version of the story, you’re a perfect target for government entrapment yourself. It seems much more likely that these agents provocateurs pick on the most vulnerable people they can find: the lonely, the naïve, the impressionable, the mentally or emotionally unstable, people who lack close friendships or life experience. This is easier than messing with shrewd, well-connected organizers. The point is not so much to catch the people organizing resistance to the government—charges of Conspiracy to Riot in Furtherance of Jaywalking are just not that impressive—so much as to discredit resistance movements by framing somebody, anybody, as a Dangerous Terrorist. If that means destroying the life of a person who never would have actually harmed anyone, who cares—honest, compassionate people don’t become snitches in the first place.

None of this is intended to blame or insult those who are entrapped. We all have moments of weakness. The guilt lies on those who take advantage of others’ weakness for their own gain. 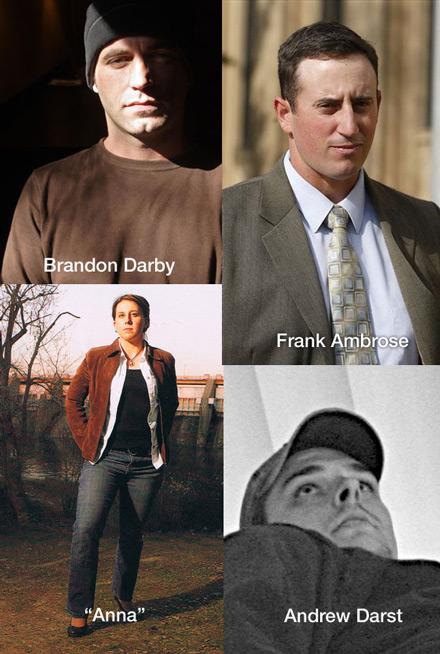 How We Defend Ourselves

Why go on meeting publicly, if the government sees this as an opportunity to entrap us? Wouldn’t it be safer to shift to informal networks or small underground cells?

The government would like nothing better than for us to retreat to private scenes and cliques, so there are fewer opportunities for unconnected individuals to get involved. It is to our oppressors’ advantage for small numbers of radicals to escalate to more militant tactics while losing connection to a social base; this makes direct action less likely to spread, while rendering it easier to justify repression. It might be harder for the government to track down clandestine groups at first, but you can bet they’ll set their minds to doing so with a vengeance; Operation Backfire is proof that closed, high-security structures are also not impenetrable.

The most important thing for us to be doing is not secretively carrying out military strikes against the State, but generalizing whatever ideas, skills, and momentum we can. To that end, we desperately need public, participatory activities offering points of entry for new people and opportunities for existing groups to connect.

Right now, there’s no reason to believe that everyone with “RADICAL” stamped on their FBI file is about to be rounded up and sent to camps. It seems that the current government policy is to collect as much intelligence as possible on radicals, target high-visibility organizers with conspiracy charges when there is a good chance of convicting them, and entrap whichever random victims are easiest to frame. That means rank-and-file participation in radical movements and communities is still relatively low-risk, so long as you use your head.

Let’s review what that entails:

Never undertake or discuss illegal activity with people you haven’t known and trusted for a long time. Don’t trust people just because other people trust them or because they are in influential positions. Don’t let others talk you into tactics you’re not comfortable with or ready for. Be aware that anything you say may come back to haunt you, even if you don’t mean it. Always listen to your instincts; if someone seems pushy or too eager to help you with something, take some time to think about the situation. Reflect on the motivations of those around you—do they make sense? Get to know your comrades’ families and friends.

It’s also useful to study the behavior of informants. An interesting analysis of the communications of the agent provocateur in the Eric McDavid case is available here.

All this is fairly common sense among seasoned radicals, but perhaps we can go a step further. Thus far, activists and anarchists have thought of security largely in personal terms—as a way for individuals to avoid incriminating themselves and their friends. The forms of “security culture” common in our communities have reflected this individualism. Yet even if 99 out of 100 anarchists are able to avoid getting framed, when agents provocateurs manage to entrap the 100th one we still end up all paying the price—losing friends, spending years working on prisoner support, and ceding the government yet another opportunity to demonize us in the media.

We need to evolve a new security culture that can protect others as well, including vulnerable and marginal participants in radical spaces who may be particularly appetizing targets to federal bounty hunters. In addition to looking out for yourself, keep an eye on others who may put themselves at risk.

For example, imagine that you attend a presentation about a direct action mobilization, and one person in the audience keeps asking crazy questions and demanding that people escalate their tactics. It’s possible that this person is a cop; it’s also possible that he’s not a cop, but a hothead that might make a very attractive target for cops. Such individuals are typically shunned, which only makes them more vulnerable to agents provocateurs: “Screw these squares—stick with me and we’ll really make something happen!” Someone who has nothing to lose should approach this person in a low-stress environment and emphasize the importance of proper security culture, describing the risks that one exposes himself and others to by speaking so carelessly and urging him to be cautious about trusting anyone who solicits his participation in illegal activity. A ten-minute conversation like this might save years of heartache and prisoner support later on.

A great deal of thinking remains to be done on this subject. How do we look out for each other without prying into each other’s business or stepping on each other’s toes? Are there other ways we can protect against the machinations of infiltrators and informants? We don’t know the answers to these questions yet; we’re asking you to think them through with us. The sooner we can develop a collective security culture that prevents federal agents from framing naïve young people, the sooner we’ll be able to build a durable, visible struggle against oppression.

Inside the FBI Entrapment Strategy — Anonymous