Fundraiser for Anton Zhuchkov and other news on political prisoners

Keep up supporting prisoners in Russia 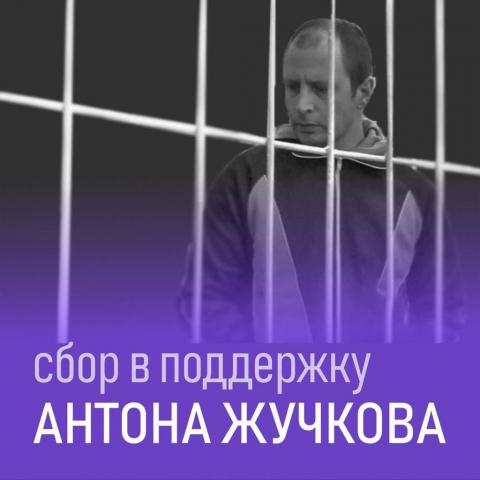 6th of March, during anti-war meeting, Anton Zhuchkov and his friend Vladimir Sergeev were arrested in the center of Moscow, in Pushkin square.

They was searched, and police found two Molotov cocktails in the backpack of Sergeev. But instead of a police station, they were both sent to Sklifosovskiy emergency hospital. In police van, Anton and Sergey attempted to commit a suicide, by taking lethal doses of methadone.

While two friends from Omsk were in coma, a criminal investigation was initiated. When they recovered, they were transferred to a remand prison. In the beginning, they were accused of ”armed hooliganism”, but later on charges were changed to ”preparation of a terrorist attack”.

In their testimony, Anton Zhuchkov said that he did not planned to hurt anyone, but instead, finish his life. ”I took methadone, in order not to see what happens in the world – war in Ukraine, events in Donbass, I was also afraid of a nuclear war. This is why I wanted to take my life, in order not to see what happens next, and I was also in a distress, that young people will live in misery” he said in interrogation.

Vladimir Sergeev is now supported by his relatives and a friend, and money has been successfully raised to pay for his lawyer. Anton Zhuchkov does not have any close people in freedom. He grew up in an orphanage in Omsk, and he is supported by few individual people only. He is defended by lawyer Dmitri Sotnikov.

There is practically no chance that court agrees of bail, but we will try to do the best we can to help him out. During his birthday, his morale was boosted with many greetings and books, and in his letters his mood is now better. Anton is being held in Butyrka prison, he is drawing and plans, doing exercise, writing poems and studying foreign languages.

Full support of prisoners is a complicated affair, and our resources are not infinite. This is why this fundraiser is needed. We would like to at least be able to provide Anton with parcels, and in best case able to raise bail and lawyer costs.

You may join fundraiser with the following means:

- PayPal: abc-msk@riseup.net (You MUST add commentary ”for Anton Zhuchkov”, as ABC Moscow is supporting a number of other prisoners)

Letters should be in Russian. You may use google translate for example. Note that a number of countries have halted all postal services to Russia, check that services are available in your country. You may send letters to prisoners via our e-mail address. You may also use the electronic service provided by Russian prison services, in case you are able to overcome barrier of the Russian interface.

From the beginning of year 2021, Yegor was imprisoned in a colony #27 in Volgograd region. Human rights activists of OVD-Info have informed, that in this colony Lesnykh was refused books, and he had repressive working conditions – working day lasted from 7 AM to 7 PM, and from time to time prisoners had to work during weekends.

Lesnykh was sentenced to 3 years of prison colony in 2019. After appeal, court sent him to a prison of lower security. According to prosecution, Lesnykh and two other accused of the ”Moscow case”, Maxim Martintsov and Aleksandr Mylnikov assaulted national guardsman Maksim Kosov.

In summer of 2019, Lesnykh, Mylnykov and Martintsov intervened when two other protesters against election fraud, Boris Kantorovich and Inga Kudrachev were kicked by national guard. Demonstrations were due to ban against independent candidates to participate to Moscow city council elections. Many demonstrations were accompanied by skirmishes with the police.

Keep up supporting prisoners in Russia

You can find the contact addresses of all prisoners in Russia supported by us here. and instructions how to donate here. If you want to make a donation to a particular prisoner or case, please contact us beforehand to make sure that the supporters of the prisoner or case are currently gathering donations.