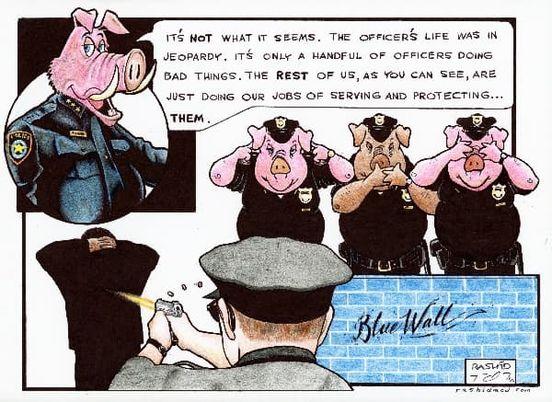 The Pig Playbook and the Bad Apple Blame Game

"Offering up one low-level pig, whose bad day at the office ignited a firestorm of mass rebellion..is just collateral damage, as far as the pigs are concerned; so long as the status quo is maintained."

As I sit reflecting on the recent Chauvin verdict, I can’t help but think back to an MSNBC headline from a few weeks ago that read, "How Derek Chauvin's Trial Is Bringing Down The Blue Wall"[1]. I’ve seen and heard this sentiment echoed just about everywhere since shortly after the trial began, and I'm still troubled by this idea, because I know that there is a very real danger in this particular line of thought.

There is danger in entertaining the idea that what we saw play out in that courtroom was some pivotal moment in U.S. history; in which law enforcement was suddenly overcome with such a depth of human emotion triggered by this lone event, that it opened up a wellspring within their hearts, initiating a collective “come to Jesus” moment. That it allowed them to see the error of their ways and compelled them to condemn Derek Chauvin as a murderer, who callously took the life of someone he had sworn to protect and serve.

Considering, at face value, the many witnesses for the prosecution with backgrounds in law enforcement (some of whom were still active-duty cops), along with emergency response professionals (for instance, several EMTs, a fire captain, and the department’s medical support coordinator) – that they all provided testimonies that turned out to be a boon for the prosecution's case, it would appear to the casual observer that the state and its functionaries were determined to get this one right.

One such star witness, Minneapolis Police Chief Medaria Arradondo, even went on record before the trial began, to describe Chauvin’s actions as “murder”, and followed up in his sworn testimony by stating that Chauvin’s actions were not only contrary to policy and training, but also violated the department’s ethics and values.[2] Lt. Richard Zimmerman, the department’s longest serving member and head of its homicide unit, said of Chauvin’s actions that they were “uncalled for” and “totally unnecessary."[3]

So what does all of this mean? Why would officers of different ranks and hues all be apparently united in the belief that Chauvin acted outside of what was reasonable and even humane in this case? What has caused this blue and seemingly impenetrable wall to crack? Did it really crack, and if not, then what the hell just happened?

Let’s be clear. This was a show trial. A performance put together with a motley crew of characters designed to sell a narrative that would successfully quell the public’s ire. The subsequent guilty verdict was an example of one of the ruling class’s favorite diversionary tactics. Derek Chauvin was the sacrificial lamb offered up to ensure the effectiveness of this tactic. That was the play.

The Pig Playbook and the Bad Apple Blame Game

This particular tactic or play is known as the Bad Apple Blame Game and is straight out of the Pig Playbook. You see, the ruling class, by way of its own demented form of praxis, knows what works, and will rarely and only in cases of extreme desperation deviate from tried and true methods. And what works and has worked since the founding of this country is deception played out upon the masses. They may change a few details or make some minor adjustments to tailor the deception so that it fits various circumstances; but the end goal is always to deceive and confuse the people from understanding what is really going down.

Most people don’t know about the Pig Playbook, or that Chauvin’s apparent abandonment by his colleagues was all part of that play. And by not knowing the play, a good many of us are left clueless as to what actually transpired and even hold this verdict up as some sort of proof that this system is redeemable and not wholly corrupt. I’ve even seen words like “justice” and “accountability” thrown around. These ideas need to be corrected and what really happened needs to be explained.

Kevin Rashid Johnson in his 2014 article, Pages From The Pig Playbook, aptly identifies this particular method that we witnessed employed in the case of Chauvin as the “bad apple blame game."[4]

He explains it thus:

Often when the dirty workings of the capitalist-imperialist system are exposed to the public, and its legitimacy or that of some crusade of it is consequently discredited or brought into question, the response is to pretend that some “bad apple” acting outside and against the system’s rules and moral standards is to blame and not the system itself.

In which case they’ll scapegoat one or a few of their own agents or puppets (usually as low in rank as possible) and throw them under the bus.

And what, pray tell, is lower than a 45-year-old, mediocre patrol cop? Especially when considering that an entire system is at stake. Please believe that no one lost any sleep after determining that sacrificing Chauvin would be the move. They would have given a hundred Chauvins in order to keep up the appearance of a smooth and seamless operation and return to business as usual as quickly as possible.

Offering up one low-level pig whose bad day at the office ignited a firestorm of mass rebellion, that raged on for the entire summer and well into the fall of 2020 in almost every major city across the country while gaining widespread international support, is just collateral damage, as far as the pigs are concerned; so long as the status quo is maintained. It’s critical to see that point so as to understand that this bad apple isn’t an anomaly, but is indicative of the festering and diseased tree that it sprung from.

This country was born out of violence. Yesterday’s settlers, who were the forebears of many of today's Euro-Amerikan squatters, came here in an attempt to escape the poverty, disease, and pestilence of Europe, with hopes of establishing a new world here in the Amerikas. They didn’t allow themselves to be deterred by the fact that there were already people here who were the rightful custodians of this land and who had been here for thousands of years. That was of little consequence. Along with lice, disease, and filth they brought also their penchant for violence. And it was through the violent attack carried out by these settlers upon those indigenous to this country, along with the attack on Africa and the millions of Africans kidnapped and forcibly dispersed here, that this new nation was born.

Out of those ragtag, violent settlers, those who were able to secure the most land and capital by plunder, formed a new class that separated itself from the laboring masses. And in order to protect what they plundered, they created an entire system of laws that are upheld and enforced by armed groups of their own creation, i.e., the police and military. The laws, along with these highly organized and militarized groups that enforce them, protect this class in their thievery, but criminalize those who have been stolen from. Literally, the "law of the land" is nothing more than the opinion of the capitalist-imperialist ruling class. The only purpose of the pig who enforces that law is to serve the interests of this class and maintain the established social order. That’s what the blue wall is.

Serving the interest of the ruling class and maintaining this social order is done most often through violent coercion as I mentioned above; but sometimes it may even take the form of one or more of the system’s own stooges testifying against a pig who has run afoul of this setup, who has thereby become a problem. Chauvin, who was acting within the parameters of what is expected from a pig who makes up part of this blue wall, was always disposable; but he became a serious liability when his generally accepted pig behavior hit a snag. The wall did not crumble in the case of Derek Chauvin. It simply ate one of its own in order to survive.

Johnson goes on to say:

Fruit never falls far from its tree. If everywhere we see atrocities occurring at government hands that are passed off as the acts of “bad apples,” but upon closer inspection are revealed to be chronic, systemic and widespread, we must begin to recognize that the tree this bad fruit is falling from is itself thoroughly rotten, and the source and cause of their decay.

This tree has a name. It’s called capitalist-imperialism – the most putrid, and environmentally and socially destructive political-economic system history has known, a decadent system that V. I. Lenin characterized as “rotten ripe for revolution.” Settling for any “solution” short of revolution will see us all go extinct. We must wake up to its designs and stop it cold.

Stopping it cold is indeed what we can and must do. Just as is the case with all things, this system will eventually come to an end. Dialectically, it must be understood that owing to its parasitic nature, capitalist-imperialism is not sustainable, and is dying even now, as I type these words. The tick can only suck blood for so long until it either bursts ,or the host becomes aware of its presence and struggles to remove it.

See, the masters of this game already understand the power of the people and know that a reckoning is coming as soon as they wake from their slumber. They know that their time is running out. We’ve seen and felt the embryonic rumblings of full-scale revolution brewing for some time now. That spark that was rekindled in August of 2014 in Ferguson, after laying dormant for over fifty years (after many of our leaders were murdered, imprisoned, or forced into exile), continues to grow and spread.

Slowly but surely, little by little, the masses are losing their fear. The people are slowly gaining consciousness, and the machinations of this system aren’t quite as effective as they were fifty years ago or even twenty years ago. The open hostility manifested in the form of fire hoses, attack dogs, and naked racism in many cases has been replaced with the neo-colonial misleadership of bootlicking Black presidents and vice presidents; with juries handing down empty, insincere verdicts, condemning pigs for abuses that are no different from what they’ve been trained to do. These latter examples are what we see happening now and have been orchestrated to instill a false hope and lull us into the complacency of believing that this country has progressed, that there are such things as good cops, and that justice can be served. These reworked and reconfigured methods aren’t because the capitalist-imperialist’s character has changed, but because the material conditions have. Imperialism is in crisis, and in its desperation, it will do any and everything to try and save itself.

That is why the work we do on the ground as revolutionaries and organizers within the oppressed and marginalized communities is critical, especially at this moment. We must work diligently to agitate and educate the people so as to hasten this collective awakening. We must use every available means and not miss any opportunity to carry out the work that will inevitably lead to the destruction of this system, and the creation of a new socialist future.