Preliminary Materials for the Theory of the Lurker 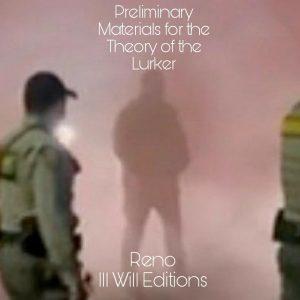 The Lurker comes to the forefront of contemporary struggle precisely because of their in-definition : a proclivity towards the uncaptureable. At the moment when conspiracies, imagined or real, come to dominate the public psyche, a figure of nebulity emerges. It is a commentary on the inability to define the terrain of State operability for a majority, that an undefinable character emerges to oppose .

The Lurker brings with it questions wherever they appear. “Who is that?”, “When did they arrive?”, “Is this figure friend or enemy?”

The Lurker eludes definitive answers to these questions because they themselves are an answer. It is the Lurker’s mere presence which points to a growing illegibility and “facelessness” of a rupture without end. It is no coincidence that a law passed in the French High Court by the technocratic regime of Macron would include a reference to “all those elements which have not yet revealed themselves” just as The Lurker takes the stage.

Spectacle cannot be fully overcome, but The Lurker positions themselves between spectacle and intervention.

The cybernetic intervention of the 90’s and 00’s is reaching its crescendo. As a lived planet burns around us, hollow promises are made of what lies beyond the material, in such new inventions as the metaverse and its accompanying geographies. Agamben said “All that is represented is subsumed by the cybernetic, all that appears solid will tomorrow appear as commodity.” But The Lurker inhabits a unique space between the seen, and the intervening. Though observed, the ambiguity of their appearance does no favors for the manufacture of an image, and the specter of their intervention suggests a dimensionality which we can no longer comfortably refer to as Spectacle.

The success of the democratic technique of government also heralds the arrival of Lurking as the primary accent in the language of revolt. Lurking comes to the center of the political theater because it is an elusive and amorphous practice with no end in sight.

The Lurker has been seen accompanying scenes of barricades and fire from Hong Kong to Santiago, and in the peripheries of attempts to sketch an exit in space-time, Lurking in the background of mutual aid kitchens and free clinics. Indeed, upon closer inspection, beyond the full-blown partisan, or the web of temporary helpers, the Lurker is the primary figure of contemporary ungovernability. When accounted for, their numbers eclipse those who have a penchant for definition. “We almost got them all, but there were some who we could not identify” laments a Barcelona Police official. The Lurker eludes capture.

Only Lurking positions us to see beyond the horizon, into a posture of in-definition which is key to the destituent project.

Lurking is a particular form of presence that becomes increasingly important once governments begin to concern themselves with power over populations and bodies. Although police can manage the transgression of this or that law, they cannot prevent the way in which Lurking orients bodies to each other and their environments.

Much is to be said of this schism between The Lurker, who becomes the primary figure of the Real Movement towards communism, but the political actors of the Social Movement seldom waste an opportunity to chastise those they feel are not “doing the work.” This is a direct reference to the Lurker, who’s mysterious presence appears to contribute nothing to the situation, but the background of this figure at the margin of the Social Movement, or alternatively, the border of the Real Movement, appears as a gateway to bridging this divide. It would not be easy to reach an accord, but to step into the haze is to step into the margins.