“Now it’s definitely time to act!”
An interview with a member of the Anarchist and Anti-authoritarian Brigade

editor's note: Information and resources on how to support anarchists and antifascists in Ukraine, Belarus, and Russia is collected at edist.ro/solidarity

After the war began, many of our comrades in Kiev became either volunteers or members of the Anti-Authoritarian Squad within the Territorial Defense. Now the squad is mainly engaged in training and guard duty. When the enemy was still in the Kyiv region, the guys went to frontline positions to help the Ukrainian Armed Forces (AFU) with surveillance from drones, participated in transporting refugees through the green corridor, and went out on calls from citizens about sabotage groups.

We talked to Ilya, an anarchist from Russia who has lived in Ukraine for almost 3 years and participated in the 2020 Belarus uprising. About the difficulty of mastering the craft of war, the role of arms in liberation and the political prospects of our region. 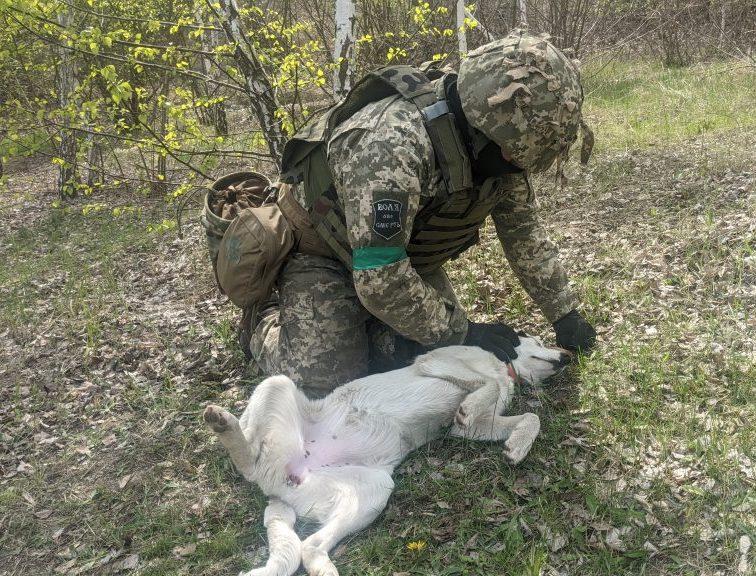 Living in Kiev, it’s understandable why you didn’t stay away. But why did you go specifically to the military detachment and not engage in volunteer or other civic activism?

First of all, I will say that I believe that all areas of activity are very important. Volunteer work, media work and political organizing, which cannot be carried out only within the military structures. The front is not just along battle lines, but in all areas where people do something together to make the anarchist movement manifest itself in confrontation with the imperialists.

Nevertheless, I have decided to take the military path. I believe that our movement needs to be able to stand up to its adversaries with arms. This has always been important to me as part of my political outlook and personally. Understanding that I and we could do it.

Also, it was not only a personal decision, but part of our collective planning. After the New Year, the anarchist movement in Kiev held meetings, where we decided what we were going to do, how we were going to coordinate with one another. Even then I decided that I would focus on this direction. Literally in the first days of the war it worked out well.

Did you have any military skills before that?

Yes, I had experience in basic military training. We practiced that with our comrades as part of our political approach. But because we were able to organize the training process when all the events started, I was able to learn and master a lot of things.

Is it hard to immerse yourself in the military?

It’s certainly not easy. But we had some like-minded people with us, who were picking up a machine gun for the first time, and everyone got the hang of it pretty quickly. Here, as in any other craft, it all depends on interest and diligence.

You have to memorize a lot, but at the basic infantry level, I did not notice anything that breaks the brain.

There is a certain amount of physical stress, you can’t walk all the time, you have to be able to run a little, fall down and get up again. But this, again, is a gain, a matter of training.

All people with average health and the desire to figure it out can get in fairly easily if there is an interest. So if anyone is wondering how realistic it is to master it, I would advise not to be afraid, but to try and most likely it will work.

That said, to say that I’m directly immersed in the craft of war would be too dashing to wrap up. Here we are, after all, in the beginning stages. Even two months of more or less systematic training is not the time in which you can get right into it.

Speaking of basic skills. How much power do you think the militia has at all in modern warfare? Given the strong professionalization of the army.

Of course, a professional, high-tech army has great advantages over any popular, guerrilla warfare.

Nevertheless, militias and guerrilla warfare also play a big role. Since Putin’s regime acts as an occupier, the resistance is led by many local people who know the urban and rural environment well. This gives them a great advantage.

Also, fighting spirit. If people are really fighting seriously, as we have seen in Kurdistan, then even the high-tech army which is much more technologically advanced than the Turkish army in this case cannot break people.

However, the most interesting thing is that any militia and guerrilla also strives for professionalism. To professionalism in guerrilla work. You have to look for ways to get the latest technical tools and have professionals who know how to handle them. There should be no misconception that a partisan is just an undisciplined grandfather Kuzmich who took a Berdanka, hid in the woods and is doing something there.

In fact, professional armies have borrowed a lot of partisan tactics. These are small groups, small stealthy strikes, and quick withdrawals. To master such tactics in order to act skillfully in this area is also quite a challenge. Anyone who is seriously thinking about people’s war, the war of non-state actors against state actors should think about this.

Besides the mentioned combat tactics, in what other ways do popular, anarchistic military structures differ from the state and pro-state?

First of all, by the social ideal for the sake of which they exist and fight. I am not sure that they can differ so much structurally from the conventional armed forces. A military situation requires a certain command system, a certain hierarchy. Even if it has to be temporary and criticized, it nevertheless exists and without it at the moment it is not clear how.

We know that “the rifle gives birth to power,” doesn’t this also apply to the anarchist armed structures? Don’t they, like other armed formations, have the potential to impose their will on other organizations?

“The rifle gives birth to power,” but, let me put it loosely, the rifle can also give birth to the power of the people. Well, powerlessness, if you will, are in a sense synonymous to me. I have always regarded guns and, more broadly, violence as more of a tool. It is true that much of man’s power and oppression is based on weapons and violence. But it also follows, in part, that this tool must be used to crush power and oppression. If this world of war has been imposed on us, then we must also be militant to defend our social ideals. It is no coincidence that the fist with the outstretched machine gun was the symbol of many insurgent organizations. It is a symbol that the monopoly on violence can be taken away from the state and the oppressors.

The rifle in the hands of the people, in this case Ukrainian society, which collectively resists Putin’s imperial aggression, is not a symbol of power, but a symbol of hope for liberation from power. A symbol of resistance to brute force.

I don’t have the numbers, but from the feeling of what I have seen with my own eyes here, a huge number of volunteers have joined the Territorial Defense forces, all sorts of auxiliary military structures and the Local Self-Defense. It seems to me that the entire active part of Ukrainian society is now in contact with a machine gun, with a rifle in one way or another. We’ll see what happens next. In any case this experience of self-defense of the people and collective resistance to the aggressor is a valuable experience. How it will be implemented in the future – I would not venture to speculate now.

Well, then let’s talk about the future in a different way, how do you think the situation in the region will develop in general?

Whatever it is, it’s completely impossible to predict lately. I, to be honest, absolutely did not think that this full-scale war would happen.

Unfortunately, I believe less and less that the war can just end quickly. Either it will enter a protracted stage, or there will be attempts by Putin to somehow advance sharply, or attempts on the Ukrainian side to actively counterattack.

The war will lead to further destabilization in the region. This promises big problems for the people. At the same time, destabilization of the authoritarian regimes of Lukashenko and Putin is possible. Which, of course, opens up the possibility of change for the better in our countries. In this situation, anarchists from Belarus and Russia need to prepare to actively participate in the events.

Why do you think this war is capable of undermining the regimes of Lukashenko and Putin?

And the Lukashenko regime, for one thing, is simply closely tied to Putin’s. If Putin’s regime ceases to exist, then Lukashenko’s main support base will disappear. Secondly, the occupation is also carried out using the Belarusian territory. As far as I can tell, this causes an additional exasperation against Lukashenko in Belarus itself. This encourages people to organize for one or another form of political struggle. For example, the diaspora, which is already very anti-Lukashenko, becomes even more organized and mobilized. We know that, for example, there are many Belarusian volunteers in Ukraine. I think this may become a factor in the collapse of the regime at some point.

What do you think people in Belarus should do in this situation? Those who want the war and authoritarian regimes to end as soon as possible, but who have no connections with organized like-minded people, no experience.

The algorithm is the same: preparation, organization, and action. Even if people are not members of a political group, because everything is covered up and it is impossible to make direct contact.

It is necessary to master the skills, to prepare for action. Putting up flyers and graffiti is useful, if people can do it, then let them do it. But in Belarus, society will have to fight the regime in order to defend itself. We must be prepared for this, for a direct confrontation.

It is necessary to organize, to unite with at least several trusted people. Reliable, so you can rely on each other. This could be 2 people, 3, 5.

And, of course, action. Any contribution now, especially in Belarus and Russia, is incredibly valuable. For example, the railroad war.[1] This is something that even simple dudes here in Ukraine know about. We were literally talking to guys from the National Guard 5 minutes ago, and there’s a guy there who says, “But in Belarus, people burned so many of these relay cabinets, committed sabotage. It really helped.”

Now it’s definitely time for action. February 24. After this line, I don’t know what else to expect. We need to strike at dictatorial regimes. If you can only do it alone, do it alone. But by all means fight. I hope we can bring it all together and coordinate so that this popular struggle can bring concrete political results.

[1] This is a reference to attacks on railroad infrastructure in Belarus, occupied Ukraine, and Russia which has further hindered Russian military logistics and resupply. See: "Rail war! Belarusians face the death penalty, the blocked Trans-Siberian, anarchists work around Moscow" linked on edist.ro/solidarity

Solidarity is Our Weapon