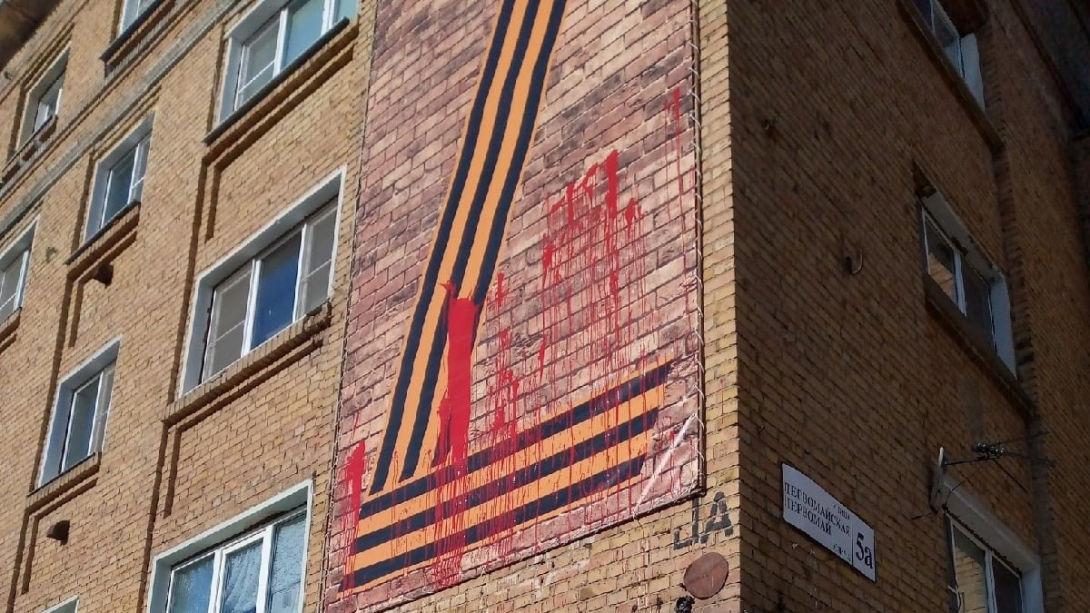 In full accordance with the trends we have outlined earlier, the situation at the front has finally reached a positional impasse. The Armed Forces of Ukraine failed to take back Kherson by today's Independence Day, and Russian plans to take the rest of Donetsk region to a single nationwide voting on September 11 can be considered a failure too. Sending new reinforcements to the front line does not lead to a significant advance, which does not exceed several kilometers for each side, but only to an increasing losses in personnel.

On today's anniversary, for the first time, a general strike was initiated in Russia against the war. This was done by Boris Goriachev - a former programmer of Meduza, one of the most popular liberal media in the country - via website stop24.day. There he called on not to go to work or study this day, not to let employees go there and not to use food delivery services:

Today is half a year of war. Half a year of hell in which millions of people found themselves. Hundreds of thousands of families were destroyed. Everything was saturated with fear. Fear of speaking, fear of supporting, fear of feeling that everything will only get worse. This fear existed even before the war. It was was the reason why I myself ignored some, as I now understand, very important protests. I was also a person who did not want to be part of the crowd, I was waiting for some other way to appear. I was wrong.

In Russia, protest is synonymous with arrest. And even if the prison did not stop people (and it does not stop some), a mass street protest is possible when there is a leader who takes responsibility, who risks his freedom himself. Putin eliminated such leaders. He simply killed someone, he put someone in jail. Someone could intimidate. There aren't many options left. One of them is decentralized actions of civil disobedience. Without leaders built on open votes. In form, this action is a one-day strike. Its goal is to paralyze Russia for a day and show the authorities that not everything in this country depends on it. If the actions of the authorities do not change, we will choose the next day, but the strike will go on, for example, for two days. Or longer. This will be decided not by some leader, but by voting. The upside is that there’s not much you need to actually do for this – in general, you just need to stay at home for the day."

Unfortunately, this is still only in words, however the lack of people willing to sign contracts for military service is already affecting the formation of new units. Ukrainian military intelligence stated on August 21 that in the Nizhny Novgorod region was actually disrupted the formation of a tank battalion (it has been going on since the beginning of July). Of the required 160 people, about 30 signed a contract for service. It is not yet possible to verify this information independently.

Military unit № 16544 from the Chechen Republic complained to the Krasnodar governor about a hundred Cossacks who left Ukraine. The document bears the seal of the 71st Guards Motorized Rifle Regiment and the commander's signature. According to the text, the second company of BARS-11 (volunteers of the combat army reserve), formed from Kuban residents under the command of Lieutenant Colonel Valery Yefremov, in the amount of about 100 people left their positions without permission. In particular, it is noted that the Cossacks refused to go on the offensive, sabotaged orders and drank alcohol. The squad set a negative example for other servicemen. "The leadership of the Krasnodarsky Krai failed to properly convey the importance of the mission to protect the sovereignty of the Russian Federation. Please no longer send Cossack units, weak in spirit, who do not share all the responsibility, to the special military operation", says an appeal published by Russian media.

Now in Russia there is a new recruitment system with the territorial principle of units and its funding by the local budgets. In the zone of special attention for recruiters fall, first of all, "small peoples" and the poorest population: according to social studies, these categories have the greatest protest potential due to the worsening socioeconomic situation. Last time, we talked in detail about the mass breaking of contracts by Russian soldiers from depressed peripheries, but along with this, since the start of the invasion, garrison courts received dozens of criminal cases on the unauthorized leaving of military units. Compared to 2021, the number of violators and the reasons they are guided by have changed. The contractors began to go just the training grounds, and some decided to escape after visiting Ukraine - they did not want to return to the combat zone.

The number of such cases grew the most in the Orenburg region and Republic of Dagestan. It is noteworthy that they are among the territories with the highest number of military deaths. In the Orenburg region, during 4 months, the court received twice as many cases as in the whole of last year. In Dagestan, as many cases were accepted in 3 months as in 12 months of last year.

Russian military advocate Maxim Grebenyuk citing two escapees from the Luhansk pre-trial detention center reports that the prison for Russian contractors-refusers in the so-called "Lugansk People's Republic" is eliminated. The commanders came for some soldiers and took them to the rear, for those who did not come, they let them go, and do not prevent them from leaving for Russia. The lawyer connects this with the appeals filed by the prisoners to the Chief Military Prosecutor's Office and the Main Military Investigation Department of the Russian Investigative Committee. We do not consider such methods to be direct action - this is simply an eloquent indicator of what moods are now in the occupying forces.

Another arson of the enlistment office took place in Konakovo of the Tver region. It happened at 5 am on March 24, but the information appeared only on August 17. Burnt wooden window frame. The person on duty unsuccessfully tried to extinguish the fire with snow. It was done by the arrived firefighters, no one has yet been caught. Later, this enlistment center became famous for the resonant "promotional movie" of the invasion, where the elder military commissar Yuri Negovora called the people to the slaughter in Ukraine. So the object was chosen worthy.

On July 29, from Borzya in the Zabaikalsky Krai, it became known about vandalism on the "walk of fame" of the occupiers killed in Ukraine (this town is the location of the 36th Separate Guards Motor Rifle Brigade). Elements of fences were torn out, wreaths were scattered, and the tombstones of the graves were smeared with paint. It was the work of children with mental retardation from a correctional boarding school nearby, left to their own devices. Free Buryatia Foundation denies any political overtones despite the desire of the investigators to find it. А criminal case was initiated under Art. 243.4 of the Criminal Code - destruction or damage to military graves. Cops on July 31 reported that five kids were involved in this event, one of whom had reached the age of criminal responsibility.

A 40-year-old doctor from Kemerovo, suspected of damaging power lines and sabotage, is charged with preparing for a terrorist attack. Attempts to de-energize the region began in mid-April: first, the metal cables for fastening one power transmission pole were sawn, then someone unscrewed the fastening bolts on the other pole, and on May 7, an attempt was made to file the supporting structure of another pole. Soon after it, was detained Alexander Chernov, a pathologist from the Kuzbass Regional Clinical Hospital - the investigators believe that he was involved in all these cases. During a search, they found canisters and bottles of gasoline, pneumatic pistols, saltpeter, gas masks, packages of money, as well as maps of Kuzbass and Ukraine.

Chernov was going to use gasoline to set fire to the police buildings and military comissariats - he himself told the investigation about this. And if a criminal case for damage to property and sabotage was opened against him for damaging the supports, for the preparation to burn the enlistment offices he got a new article. On August 16, a case was opened against the pathologist for preparing for a terrorist attack. For it, he can get from 10 to 15 years in prison.

This morning, probably in honor of the Independence Day of Ukraine, an unknown person on a bicycle threw two Molotov cocktails at the central entrance of the regional administration in Oryol. Only the second exploded, the fire was quickly extinguished. During the extinguishing, one of the employees received some burns, and was provided with medical aid. The governor posted a video with the moment of this attack.

On the night of June 17 in the Republic of Chuvashia, two guys, 22 and 24 years old, dismantled a Z-installation, on one of the central streets of some town. The guys were soon detained and issued under Art. 20.3.3 Part 1 of the Administrative Offenses Code. A little later, a criminal case was initiated on the fact of vandalism, and even motivated by hatred and enmity. During its consideration on August 5, it was decided to impose a punishment on them in the form of a court fine in 20,000 rubles. They also had to compensate for material losses.

Semi-swastika on the rear window, painted over last week by unknown nocturnal strollers in Nizhny Tagil

Sergei Moskalkov, a conservative opera singer from Moscow, told on August 18 that his neighbor, a retired general, had recently had his car tires slashed for Z-inscription. Another supporter of the regime added in the comments that there are a lot of such stories, so many have removed such stickers from their vehicles: "There are very few of them in Moscow: sometimes cargo, fixed-route taxis - and that's all..."

And not an anti-militarist act but also social war: a 32-year-old resident of Mytishchi in the Moscow region was detained around August 11 for setting fire to the car of his former employer with an incendiary liquid. The owner did not pay him for the repairs. A criminal case has been started on causing material damage, the court chose a preventive measure for the defendant in the form of a written undertaking not to leave the place and "proper behavior".

Also you may be interested in this story about how Ukrainian railway workers survive during the war avoiding mobilization with varying degrees of success.

In addition, see our little recent investigation about how those who do not want to be mobilized to the Ukrainian army are fleeing through closed borders under the pretense of study in European universities and why they can be deported from the EU at any time.

Refusing to die for the needless interests often requires more resoluteness than showing bravery on the battlefield. Long live social struggle beyond the borders and the front line!