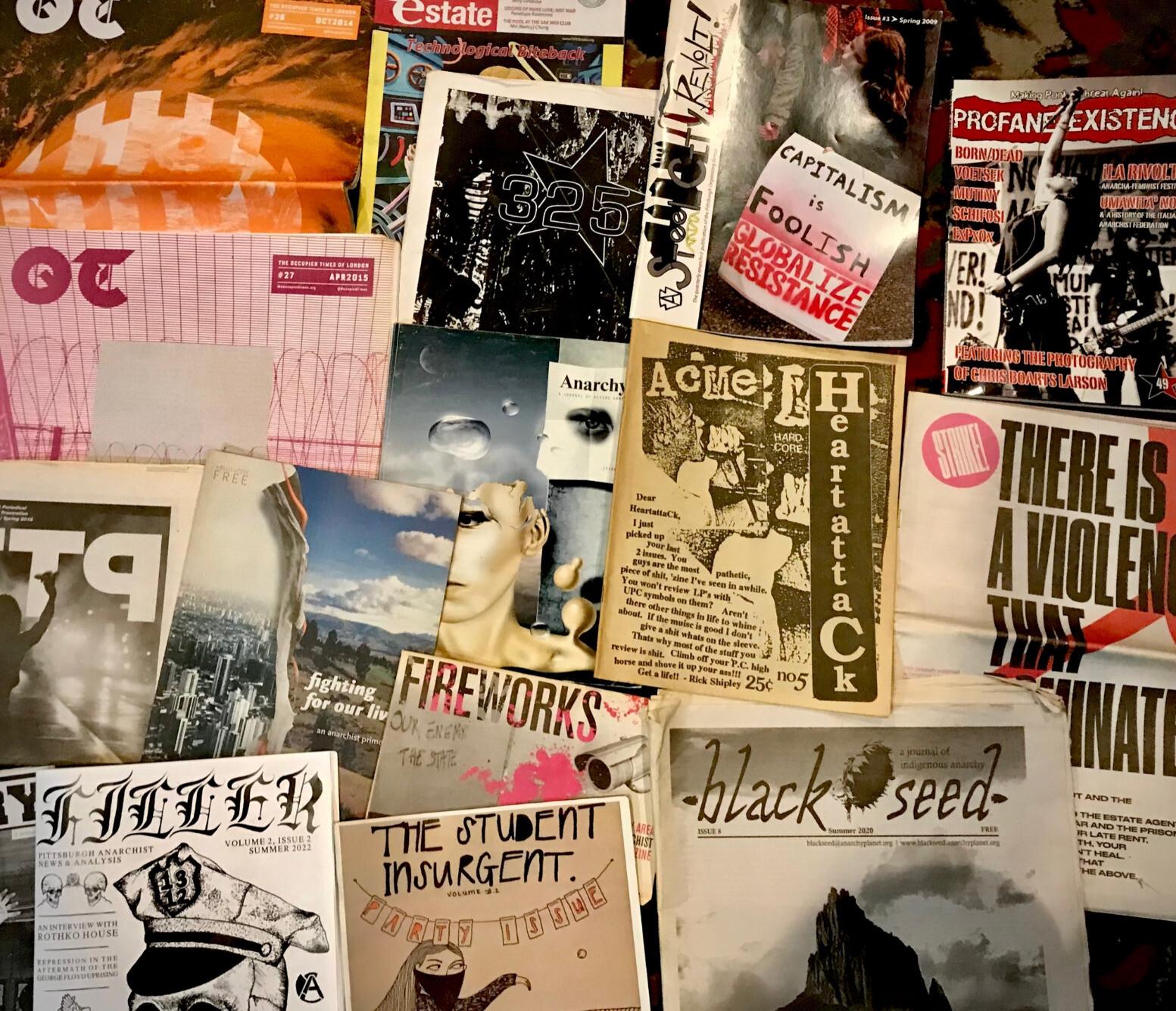 the tweet ended there, but since this is a toot i guess we can all afford to be a little more sincere than that.

I've been combing through back issues of Profane Existence a lot lately. I personally feel like Filler (both the magazine and the distro) is currently stumbling along the paths that older anarcho-punk projects like PE, crimethinc, or Slug & Lettuce set out on a couple decades ago. But the more ephemera I stumble across, the more I read old zines, the more I can't help but wonder just what the fuck happened to anarcho-punk.

From what I've read, there was clearly a time when anarcho-punk zines would drop 100-page new issues every few weeks or months, and were happy just to break even on printing costs.

From what my older friends and mentors have told me, there was a time when most hardcore punk zines were actively sent out to prisoners thru bulk distribution across Anarchist Black Cross chapters... because most punks actually gave a shit and even if they didn't they still had at leaast heard of ABC.

Even after 10 years of putting an absurd amount of effort into this project, Filler is nowhere near the scale or consistency of anarcho-punk zines from older generations. And I think it's a little too convenient to simply write this off as a consequence of coming up during the rise of social media and the death of print culture.

The truth of it is that older zines emerged from a constellation of hardcore punk scenes where the culture was still sorta expected to be earnest, sincere, scrappy, and ready to DIY. You know, almost like it was a counter-cultural movement or something.

And what I think a lot of people my age and younger have lost to the internet is the collective practice of building the culture together; the practice of finding each other.

When I was a teenager, the amount of fucking time and effort I put into seeking out hardcore punk bands felt fucking heroic. I'm 28 years old, I grew up with the internet. I had it easy. But still, the dedication to the search made every encounter feel magical.

My emotional relationship to the music I worked so hard to find made me feel morally obligated to directly support the scene. I always tried to find a way to buy CDs and records (okay, mostly CDs) direct from the bands or from anarchist labels before I resorted to piracy. I wanted the inserts so I could read the lyrics and hang the posters on my wall and look up all of the books and distros and bands the artists thanked for supporting them.

Looking back, I'd say I came up at the end of an era. Every time an era of punk ends, there's a period of fragmentation and innovation. I think that the thread that keeps weaving all these fractured scenes and projects and spaces back together into a movement over and over again is ... well, kinda simple. It's really just about wanting to find each other. Like really, really being invested in listening to what other anarcho-punks have to say, in other parts of town, in other regions outside the city, in other parts of the world. It's as simple as that. You can be hardcore about it and dedicate your life to knowing the histories of it all, you can be a weekend warrior about it if you got real responsibilities and shit, but you just can't let yourself be a poser about it.

So anyways, hi, you can call me housepunk admin, since that's how i perform "Filler" on twitter. I decided to throw my life away and become an anarcho-punk in 2009. Most of what I do under the name "Filler" isn't printing, editing, tabling, formatting, writing, or even shitposting. I consider the cornerstone of distroism to be obsessively, deliriously, unhealthily, obnoxiously invested in hyping up all the dumb creative shit my friends are thinking about and working on.

I believe distroism as a whole is about encouraging dumbfucks everywhere to follow through on the dangerously stupid projects they talk about wanting to start one day. To lovingly tease, critique, simp, fundraise, contribute, and distribute everything that resonates across our region's archipelagos of affinity.

Up the fucking punx. Anarchy forever. yep. thats my rant. felt cute, might delete later. might work this into a column something for the new issue, idk. if i'm being honest, i'm just writing this to procrastinate getting caught up on mailorders